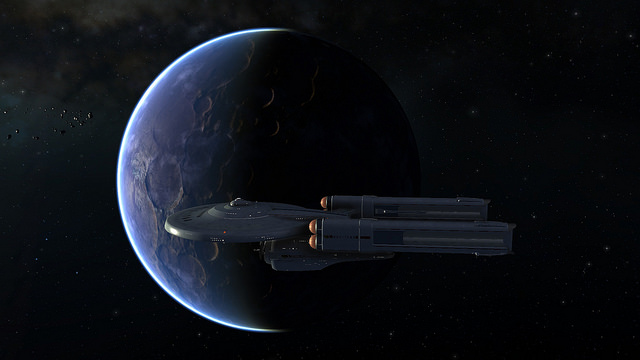 More importantly, of course, is why in the world should you care? After all, you may or not be a Trekkie, and you can form your own opinions of the series if you’re willing to pay (cringe) to watch it. It’s the big picture, though, the thoughts behind the reasons that merit your attention. An example from the show—apparently, someone neglected to show ranks appropriately on the casts’ uniforms. The problem was discovered (sorry) and repaired with CGI. That’s a little thing, not the big picture. Sure, some people would care, but it’s not what I hope to do here.

5. Prequels are by definition sketchy. Two words: Star Wars. I liked Rogue One, and strictly speaking, it is a prequel, but our heroes don’t get off that planet alive. The new Star Trek movies with Chris Pine are great, but they succeed as movies. No one is looking to make them into a series. Kingdom- or empire-building requires something much different than a 15-episode story arc.

4. The characters on Discovery ask too much of my suspension of disbelief while giving too little. We had a dramatic opening to the series in which the lead, Michael Burnham, disobeys her commander and fires on Klingons, starting in essence a major war. She is sentenced to life in prison, but modern writing being what it is, she gets out within six months and continues to serve under a cloud. Instead of offering a monumentally important compendium here, I’ll concentrate instead on two names: Michael Burnham and Tilly. Why must this woman have a man’s name? Apparently, it’s the signature move of Bryan Fuller, the producer. I don’t like it. Yes, I remember Michael Learned who played the mother in The Waltons, and I’m sure it’s a perfectly valid first name, as valid as Georgette or Georgine, perhaps. I think it goes against the grain of female empowerment, which is probably not the right phrase. (Burnham goes into a different category: icky images.) Contrast this with the character Tilly, which rhymes with both “frilly” and “silly.” Although she is smart, she talks too much, especially about her plans and dreams, with not much substance. She cries a lot. Not officer material, but the other characters always try to improve her self-image. Boring.

3. The writing is bad. Too much talking about too much feeling, to put it in a nutshell. The dialogue is often stilted or wooden or whatever other negative adjective is needed. Sometimes it’s unintentionally funny. One of the characters, Ash, is really a Klingon (Voq) who was surgically altered to look human. Michael has a fling with him before that comes out, and he doesn’t know about his real origin anyway for quite a while. When he reunites with his people, he and his real love, L’Rell (not Lor-el or P’rell, notice) are speaking in English when he asks “Why aren’t we speaking Klingon?” It’s a good question, since the Klingons are completely inconsistent in spite of the use of translated blurbs. Regardless, the plots are too complicated to allow for better writing. Ash finds a baby that L’Rell had but pretends to sacrifice along with him to save the alliance. It’s just too much. Both are safe at the end of episode 4, with the baby going to a monastery. Which of course they have in that day and age. Luckily.

2. The science is bad. No, I’m not a physicist. Not that I didn’t aspire to be one decades ago. It still interests me. And when challenged once about not understanding even a basic combustion engine, I was able to reply that, in fact, I do have some understanding of it. Since there’s not really an engine that uses dilithium crystals, the leap to engines that use mycelium (or fungus) is not that great. But it is weird. Here’s one of those wondrous coincidences that the writers came upon: Guess who is the best known expert on mycelium (or mushrooms)? Paul Stamets. In Discovery, that’s the name of the lieutenant commander who injects himself with the spores that allow the craft to jump anywhere in the universe instantly. Our earthly mycologist Stamets has a TED talk “6 Ways Mushrooms Can Save the World.” And other worlds too, one assumes.

3 thoughts on “Top 5 Reasons Why I Hate Star Trek: Discovery”