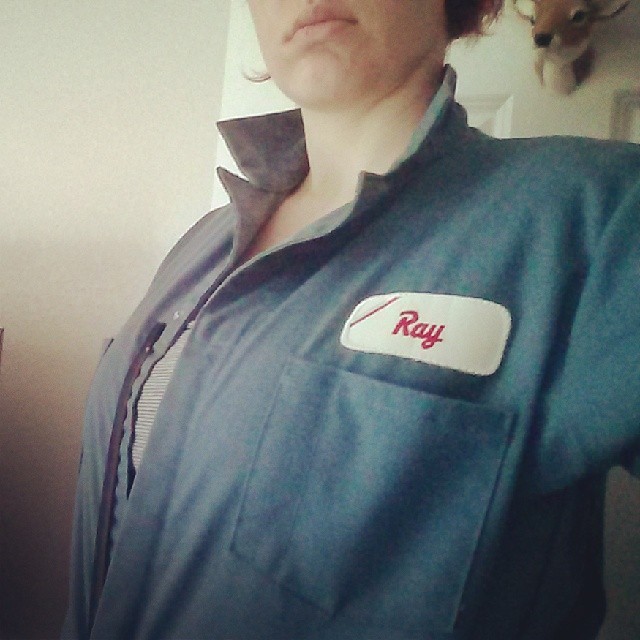 The Shirt: n. 1. a person who represents authority and/or special knowledge and/or training/employment and by putting on the signifier of that authority etc. becomes, symbolically, the source of that authority. The actual “shirt” can also be a nametag, hat, uniform, grooming (haircut/facial hair/tattoos, etc.) or any other recognizable identifier. Usually capitalized. Often derogatory. Compare “The Suit.” Origin: Combined form, first attested mid-21st century, southern California. “The Shirt said it couldn’t be repaired and would have to be replaced.”

Not to single out women as victims, of course, but most of us don’t know anything about our cars. Yes, I do know one woman who can change her oil AND install brake pads. I myself have been trained in changing a tire (1990, Relief Society Homemaking Meeting, church parking lot). Still, women are more likely not to know anything about mechanical problems, for example, making us perhaps more vulnerable to whatever The Shirt may tell us.

The Shirt, therefore, implies authority, whether deserved or not. In season 2, episode 13 of Roseanne (“Chicken Hearts,” 1990), we see her working at one of her serial, menial jobs. The boss, Brian (Peter Smith) is a kid, really, just finishing high school. Roseanne has reminded him that she can’t work weekends because she has a family.  As “The Shirt,” he can say the following: “You are paid to follow my orders!” She can put him in his place (her shirt is a yellow and red affair with a stuck-on chicken logo) not just because of their history but because of her one-liner, “You got a big booger hanging outta your nose.” (This clip is bad and ends with Brian’s comment.) He runs off to strong laughter, and Roseanne earns the respect of her workmates. Of course, he gets the last word when he fires her later, citing her bad attitude. He is an example of a bad shirt.

Few of us, however, can think that quickly. Most, when confronted by authority, acquiesce. Last year was different. During the pandemic, stories arose of what might be mandatory-mask attacks on employees. This article from last year includes a Texas story. A customer in our nearby Cedar Hill angrily pushed a young woman employee down when she pointed him to the door when he refused to put on a mask. Sadly, incredibly, people have been killed in arguments about masking.

More common, I expect, were the newly-empowered employees “reminding” customers to mask up. Irritating, but endurable. At the end, I was only pretending to put on hand sanitizer at entrances when “invited” to do so. Power corrupts, etc.

Usually, the guy/gal in the shirt (or with the nametag or in a company lab coat) commands our respect. We assume a certain level of training and expertise. For plumbers and electricians, we know of state-mandated licensing. But we are surrounded by much more daily opportunities. These days, our cars are smarter than we are, our phones have access to the entire world, and articles have to explain why our appliances aren’t designed to spy on us, but hackers can hack them to listen to us. My car had to have a software upgrade for its transmission, my phone knows where I’ve taken it for years (though it sometimes goes missing), and there is such a thing as a smart toaster (on sale at Williams-Sonoma for $299!) Obviously, we don’t know how to rewire or replumb a house or fix most things. Of course, we need The Shirts!

What about the people without the shirt? Lawyers dress appropriately for court, but even in the office, they wear suits and ties or pantsuits and dresses. The series Suits (2011-2019) works from the premise of a man without a law degree posing as a lawyer for years; all he had to do was put on The Suit. Doctors often wear white lab coats. Their stated reasons are to be recognizable to colleagues and to have pockets. Reason 4 is telling: “emphasizing doctor status.” Other winners are “symbol of cleanliness” and “psychological separation.” Some people suffer from “white coat anxiety,” a syndrome in which blood pressure elevates when “the coat” enters the room.

An important side note: Psychiatrists typically don’t wear white coats in order to “maximize rapport” with patients. Pediatricians too. Those of a certain age and sinister memory will recognize another reason. “White coats” were the orderlies in psychiatric facilities, getting an important line in “They’re Coming to Take Me Away” (Napoleon XIV, 1966). This version is just lyrics and music (if that’s what you’d call it). Others, more troubling visually, are available.

How to avoid confusion and and over-dependence? Know some of the jargon. You can learn the basics of fuel injection without knowing how to repair the system.  If you can’t be savvy, at least be leary. Don’t be intimidated. Don’t defer blindly. Be ready to question. And finally, if you’re The Shirt, stay sharp; stay humble; stay honest. In the long run, we want you to be right. We respect your expertise and thank you for it. We can probably go too far the other way with self-diagnosis (new term: cyberchondria), but we’re usually wrong. The Shirt shouldn’t mask; let it inspire.