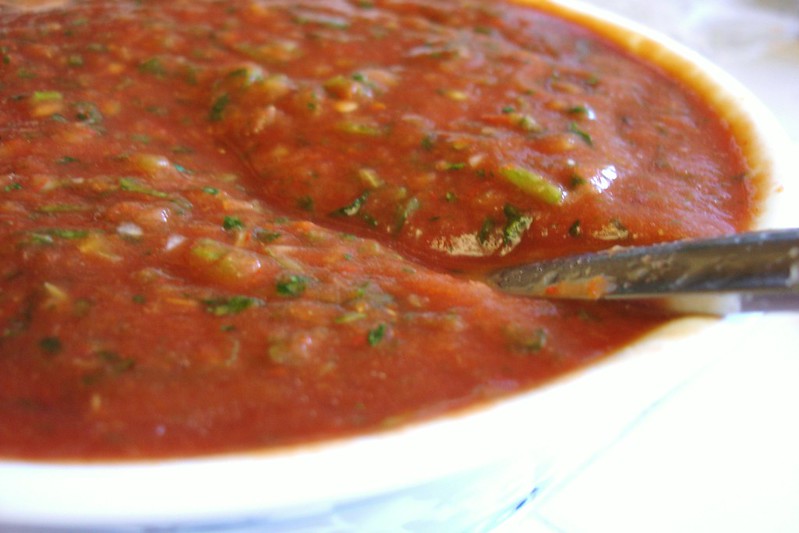 When my son called last week to ask me about this foundational recipe (requested by neighbors, lauded by air conditioner repairmen), I explained it so he could make it himself. He asked, “How can anything so simple be so good?” And therein lies a tale. It’s not as simple as listing the ingredients. Here we go.

Should the tomatoes be fresh or canned? Yes. A friend who gave the original version said canned were fine. I’d been using fresh in a slightly more complicated version, but I don’t think it matters much. How much? Depends on how much you want to make. That isn’t meant to sound smart alecky. My last iteration used a 14.5 oz can of stewed tomatoes. Someone had said canned whole tomatoes work better than diced, which I had been using. Sadly, when I put the tomatoes in the blender, I saw teeny tiny bits of celery. The horror! I decided not to throw out the batch, hoping all would be well. A sensitive palate can detect the teeniest tiniest hint of celery, but it’s fine. Back to tomato theory. Fresh tomatoes ought to make a huge difference, and I don’t understand why they don’t. So it’s obviously much cheaper to use canned. Either way, if the final result is too watery/thin, I drain it with a colander. (Side note: Our mother had for some reason learned can sizes. The one I used is technically a #300 can. You, too, can explore this bit of info here. That doesn’t appear on the product but serves a purpose for commercial cooking—prisons come to mind. This video shows how they’re made from the show of the same name; the narrator enjoys her puns at the beginning “airtight reputation,” for example.)

Cilantro is the word we use in the US and Canada for an herb used throughout the world. A more common name, coriander, is also used but here usually as the ground or whole seeds. Not everyone likes it. Some people find that it tastes like dish soap, likely based on a genetic response. People do study these things. Since we buy cilantro in bunches, there’s not so much a measuring issue as a preference one. The stems are too bitter, in my opinion, so I cut off the top part and discard the rest. At about 39¢ a pop, it’s not a big investment. I’d guess I use about ½ cup usually. The rest usually ends up getting tossed. In case you have some who don’t like cilantro, I’d recommend two batches. This recipe calls it a key ingredient, but it also suggests using green pepper if you don’t like jalapeno. EEK! This recipe calls for 2 tsp. cumin and 2 tsp. sugar. I’d say no, but I guess you can try. I also don’t add garlic.

Onion adds not just heat but also flavor. I’m not a raw onion fan, but it has to be here. The variety doesn’t matter particularly—red, yellow, or white. Each has its devotees. The red ones are expensive, so I wouldn’t use one in an otherwise cheap dish. Plus the flavor is a bit different. Flatter onions are milder and sweeter, or at least someone told me once, and I believed them. I don’t use green onions because I don’t think they go in a blender well. How much? Again, to taste. About ¼ to ½ cup. (The Onion used to be a premier satire site. Not so sure any more. And then we have the Great Onion Recall of August 2020 which resulted in millions of onions being tossed before their time “out of an abundance of caution.” The risk of salmonella, you know.)

Jalapeño. You’ve heard about the Scoville Scale for measuring the level of heat. A jalapeño resides down near the bottom with 2500 SHU. A bell pepper has none, and Anaheim and poblanos have 500-1000. The chart goes up to 16 million, which—though it doesn’t say—must be fatal. I once burned my hands as I worked with jalapeños to can them. Seeds or no seeds, they are spicy. As newlyweds, we swaggered into a restaurant in Santa Fe and assured the wait staff we were from Texas so, sure, we’d take the green sauce. We slunk out, since it was way too spicy to actually eat. Lesson in humility learned. They probably do that to all the Texans. Because of the science of receptors, heat is more personal than anything else on this list. Adjust accordingly.

Lime juice. Half a lime if juicy, whole thing if it’s not. Bottled is okay if you have to, but go easy since it’s not a good substitute for fresh. And why not lemon, you may ask? I once read a recipe that called for chopped nuts. As in by hand. The instructions said that if you didn’t know why the nuts had to be chopped rather than ground, then you had no business making said dish. Technically, I don’t know why not lemon. It just is. Since you are anticipating a “to taste” here, I’ll just say it’s hard to get too much lime juice out of a real one, unlike a lemon. Rule of thumb: It’s easier to put in more but impossible to take out too much.

Salt is a wonderful thing. Someone I know once said you can eat anything with a little salt and a little oil. Yet I hope we’re never called upon to do such a thing. It’s one of the basic five taste groups along with sweet, sour, bitter, and savory, a relatively new addition with receptors discovered in 2007. It’s also called umami, the Japanese word for “tastes good.” Salt can also ruin a lot of things, so add it last and incrementally. The pepper is just a chemical burn, not a flavor, remember.

Throw it all in a blender but don’t make it a soup. Once it’s all finely chopped, stop and start adding the salt. It will keep about two weeks in the fridge, though it doesn’t last that long.

What to serve it with? Tortilla chips, of course, but what kind? White corn, yellow corn, thick, thin, ruffled, round, triangled. Cheap, expensive, homemade (do you do that?), salted. Sorry. Too many choices. Eggs, quesadillas, nachos. I like a salad dressing that is equal parts salsa and sour cream. Great on a taco salad, naturally.

So, how can something so simple be so good? I don’t know. It’s not really all that simple. Just that good.

4 thoughts on “The Salsa Recipe”