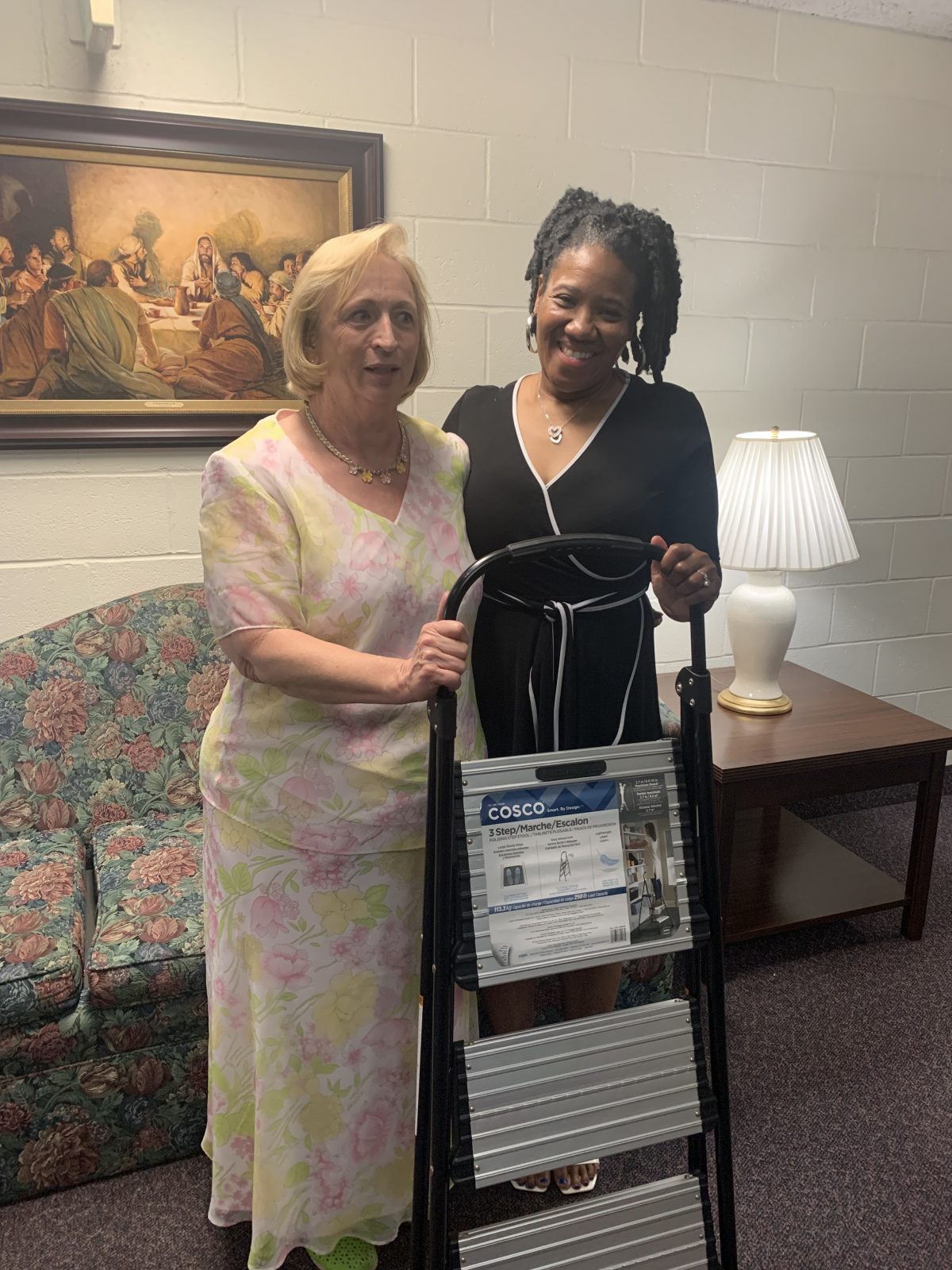 We aren’t encouraged to tell about our good deeds. In fact, they are to be done in secret (no trumpets announcing our glorious works) so that we can be rewarded openly. It’s where we get the phrase “the left hand doesn’t know what the right is doing” when it was a good thing (Sermon on the Mount) and not now, usually, when it isn’t.

But there I am, with Tonya Stafford Manning, and a stepstool. She needed one, so I bought her one. When the women at church (Corsicana through Dallas) gathered up hundreds of new towel sets for her safe houses, we packed them in her car one Sunday afternoon. There was a single folding chair in the back seat. Somehow it came out that was what she stood on to change lights or adjust security cameras.  Since I am now my grandmother (You don’t have enough light to read! Make your bed! Don’t stand on that—you’ll break your neck!), I went to Costco where I bought her a Cosco brand step stool. It was delivered last night after her presentation on human trafficking.

Now, why “for such a time as this”? We just finished the book of Esther for Sunday school. I’ve read it, listened to it, heard three podcasts on it. So much I didn’t know or understand. The key lines have to do with her decision to approach the king in order to save her people. To protect him, this action is forbidden when uninvited unless he extends his scepter to the one who approaches. Esther, even as his queen, can’t break this law. Her people are in danger of annihilation, so her cousin Mordecai says to her, “…and who knoweth whether thou art come to the kingdom for such a btime as this?” She finds her strength, she accepts that she may fail (“If I perish, I perish”), and off she goes.

So, I believe, Tonya is an Esther: a queen in her own time who has risked much, even her life, to save people. And it’s not just young women. Anyone can be a victim. Old, young, pretty or not, any race or gender or orientation. Here I interviewed her for another site and included links to sites and a documentary used for training Texas workers get about trafficking. The film Be the One starts at 5:30 and is well worth watching.

One young woman said she wanted to do just what Tonya is doing. Tonya’s answer was surprising: “No. You can do something better, something more. I could die tomorrow, but this has to go on.” It’s about love, after all. Esther didn’t want or seek death. She chose life and love. Loving these victims is not easy, for many reasons, but it will go on.

What else can be done? Lots. Her non-profit, It’s Going to Be OK, is privately funded. Accepting federal money means accepting federal rules, not an option for several reasons. So, yes, money. And towels. Panties. Time. The occasional step stool. The link includes information about the Hope and Pearls Gala, coming January 21, 2023, for the first time in a while…something about a pandemic, you know. It’s a massive effort that includes law enforcement at all levels, now Homeland Security, therapists, physicians, hospitals, courts. And Tonya, sitting with rescued victims at every stage—from a driveway in Cedar Hill to the grounds of the capitol in Austin where she launched House Bill 2290 designating January as Human Trafficking Month. Last night, she told us she’s now off to Nebraska.

Things are hard these days. The heat, the price of eggs, you name it. Most things you can’t affect at all. This is something you can. Protect yourself first (turn off open tracking on your phone) and speak frankly to others about the dangers of victimhood. It’s real. If not trafficking, then falling for some scam or another. A police chief when I worked with CPS said he’d learned there’s not a single thing one person won’t do to another. It’s real, but you can help. Tonya will let you know what to do.

4 thoughts on ““The right hand knowing what the left is doing, for such a time as this.””