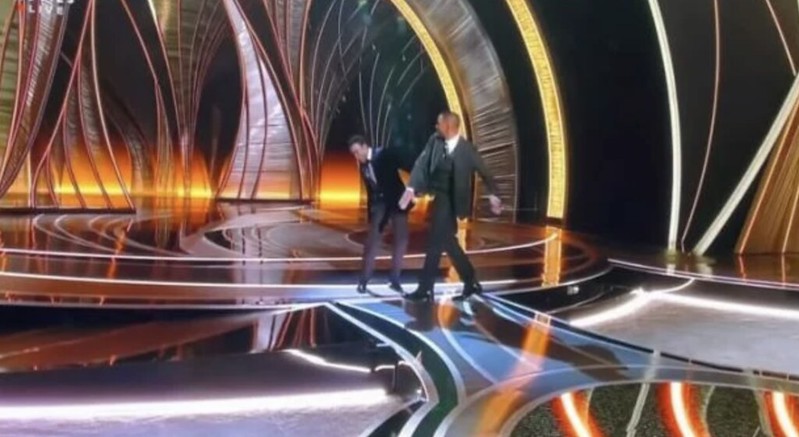 The Oscars were not my first choice of topic. After all, I wrote about them last year. People write about them every year. I know people who watch ALL the candidates for Best Picture as a matter of course. I’ve seen the one (Dune) which uses half a good novel and had these wins (cinematography, editing, score, visual effects, production design and sound). No way it was going to win the big one. I saw bits of West Side Story (great music that makes for the worst earworms) and Don’t Look Up (probably the silliest ending ever). Otherwise, nothing.

But then—the Big Slap. In case you didn’t see it, here is one clip. To summarize if you oppose such things: Chris Rock made a joke about Jada Pinkett Smith’s shaved head. “Jada, I love you. G.I. Jane 2, can’t wait to see it.” After a little back and forth her name in Rock’s mouth, Will Smith walks (not “storms” as was sometimes reported) and slaps him. My opinion is that it could have been staged. Ratings are low, so maybe that originator of bad ideas for the Academy said something like “what if somebody slaps somebody…?” Oscar Wilde said, “The only thing worse than being talked about is not being talked about.” See Oscar ratings since 1994–a deep dive.

This piece from The New York Times takes it all seriously. It notes that Jimmy Kimmel was among those (like me) who first thought it was staged. Mark Hamill tweeted #UgliestOscarMoment_Ever. In contrast, Tiffany Haddish (technically I don’t know who she is, but she starred in Girls Trip with Jada) said it was “the most beautiful thing I’ve ever seen.”

Questions remain. Will Will lose his Oscar as Best Actor in King Richard? Will he be charged with assault? Does the Academy still have standards? If it wasn’t scripted, why didn’t Will use the real slug from Independence Day? Are there really just two sides—Team Will and Team Chris? The American version edited out the objectionable language that followed; the Australians didn’t (viewer discretion advised) but that’s who we are. Right? Are these people really friends after other jokes in 2016? Is there really no such thing as bad publicity?

Of course, it’s not that I really care. These people are actors. Every single one of them. And we are all spectators. Every single one of us. I don’t care about them as personas. I want to see their work. Their opinions don’t matter to me any more than mine matter to them. If I had to be on an island with just People magazine, it would be the first bit of kindling. Yes, the pandemic has been particularly hard on the arts, and I appreciate the comeback efforts. But the Critics’ Choice Awards and the People’s Choice Awards have no overlap. None. And I’ve actually seen 5 of the 8 favorite movie nominees (not the winner, Black Widow). I don’t think I’m low-brow or dim. I’ve just seen the latest Asghar Farhadi film A Hero and while I don’t think it’s as good as A Separation, it is definitely not American and, therefore, maybe a bit more interesting.