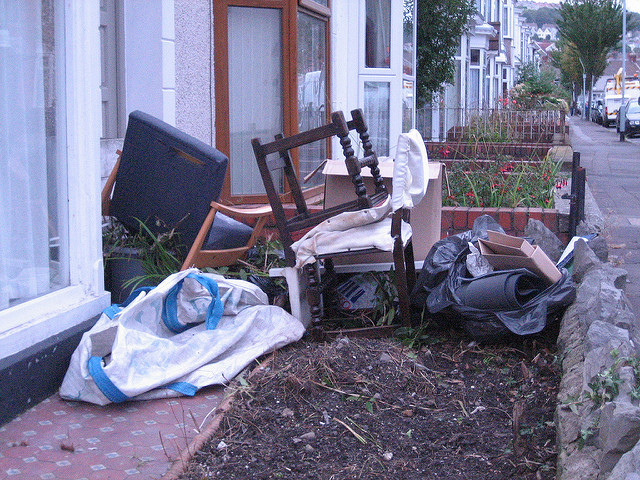 Stuff. It’s my bane. That word has all kinds of terrible meanings: poison, death, destruction, woe. Maybe it’s not that bad—unless you ask one of the kids in the family who fear I’ll drop dead and they’ll have to do something. “Mom, we’re just going to get rid of it all.” Fine. Good luck. A friend of my aunt’s commented that we put too much in her estate sale, and her children were going to keep her things. What could I say? No, they’re just telling you that? It’s a trend.

So with a big remodeling project, I was/am faced with mountains of stuff. Lots of it remains: crystal I’ll never use, odd bits of china, figurines even I don’t care about, etc. I refuse to pay for storage, and if it doesn’t get donated, it will go to the attic or the curb. Or into an already-stuffed drawer or cabinet. Perhaps if you’re of a certain age, you know George Carlin’s riff on stuff. Low profanity level. Charlie Chaplin said, “Humor is playful pain.” Carlin gets that going here.

An essay I used to teach, “Neat People vs. Sloppy People” by Suzanne Britt, is worth the read. It is my life. I find things that make me think about people who’ve gone or a happy time; someone commented that I’m connected to my dead relatives on a molecular level. I have piles of things I intend to read, unfinished projects, unbegun projects. But I won’t get morbid. I’m working on it. The cool thing about Britt’s essay is that it’s unfinished. This is the last line: “After they’ve finished with the pantry, the medicine cabinet, and the attic, they will throw out the red geranium (too many leaves), sell the dog (too many fleas), and send the children off to boarding school (too many scuff-marks on the hardwood floor).” All the other teachers or nicely organized writing specialists assume that it’s a complete piece, but if you read it at the end of the page, there’s no doubt that you’d turn the page because it’s so obviously incomplete. No conclusion. Even my students admitted to turning the page. It’s a brilliant move. That’s how we sloppy people are.

One final note on stuff: Bette Midler tweeted this out last week—“And how was YOUR Black Friday? No injuries, I hope! It’s incredible that we have to fight over STUFF. If there were a DECENT minimum wage, or if workers were treated fairly, and got a tiny portion of the kinds of salaries and bonuses CEOS pay themselves, we wouldn’t.” Hmmm. Not that I would shop on Black Friday, but her explanation is that people don’t have enough money and so are fighting over stuff. In 2017, only 542,000 were paid the minimum wage. Half of those are 25 or younger. These cities and states have higher minimums. It’s a whole different issue. As for Bette Midler, I guess she didn’t understand Black Friday. People are cheap. There were deals to be had. Not people fighting over limited bread. As George Carlin said, we go out to get more stuff. I’m trying to do better. No more stuff for me today. No thrifting.

If there’s a takeaway today, it would be to give be creative in giving. An experience. A kind gesture. Not a something. Time, perhaps. Or love.