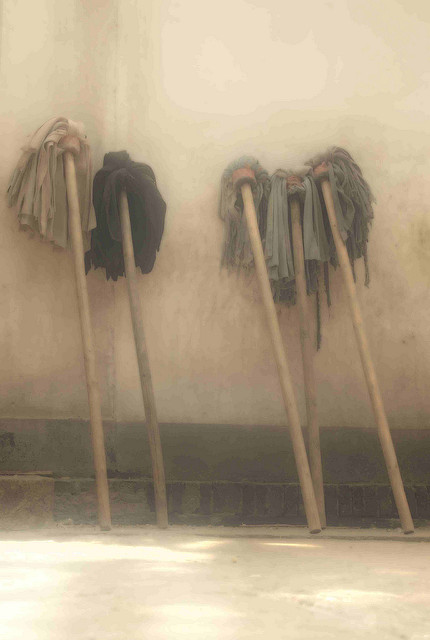 Some years ago, I hired a woman to do a deep clean of my house. She and a crew of her children plus a cousin or two came in for about eight hours. That seemed like a long time, and they worked straight through except for a single pizza break. One part of the operation she did alone. She loved cleaning floors, and the others obliged her.

I noticed that she did not simply sweep then mop, my usual routine. She swept several times, then mopped several times. When she was done, she came to me and said, “The floors are clean and fresh.” The scent of lavender product (Fabuloso, which I’d never heard of at the time) filled our home, sweet and calming. I was pleased. I asked her why she mopped the floor so many times. She said it needed to be cleaned. Perhaps she thought my question a bit odd, the answer a bit obvious.

This woman was from Central America. Her English tended to be precise and brief. My “object” here is language: The use of one word instead of another, and the power of that choice. When I say I am going to mop the floors, the meaning is limited to that action. When my better example came, this woman taught me that I need to clean the floors. The change in attitude is my topic today.

Last week in Nashville, we saw more than the eclipse. There was music to be had downtown, including Aaron Lewis. We’d never heard of him, but the Ryman Auditorium was filled with his fans singing along with him on every song (including “That Ain’t Country,” included for your listening pleasure). It was quite the sociological experience. I learned what a pedal steel guitar is, an instrument I’ve always called an electric dog, out of ignorance and very slight cleverness.

The Belmont Mansion was our choice for Saturday. The original owner was a woman named Adelicia Acklen. Her story is quite remarkable—wealthy, beautiful, savvy, involved, she had several husbands from whom she had to protect her money; the last one was “dismissed” to live in a boarding house. We didn’t ask why. Of her ten children, only four survived to adulthood.

On the excellent tour, guided by a docent named Dani, we learned many things, the most important being the use of a concept related to mopping and cleaning. Dani pointed out the pallet at the foot of one of the children’s beds. Its purpose, she said, was to have one of the enslaved women sleep nearby at all times. Not a slave: enslaved.

What a difference that makes. Suddenly the responsibility for that person’s condition in life shifts from noun to verb, from being a thing to a description of circumstance, from non-entity to person. It is an ennobling change, in my mind. Dani was most proud of a new book for sale in the museum shop telling the stories of these people. It’s not on Amazon yet, but she said, “If you are only getting one book, let it be this one.”

These days, the symbolic presence of Confederate statues troubles some, with a view to putting them in museums and cemeteries. Others worry about the unintended consequences of erasing reminders of a history replete with difficulties.

For now, the change I support is simple: Stop speaking of slavery and begin calling it enslavement. It’s more powerful, more pointed. It continues in the world inside and outside our country. Perhaps our efforts should be directed where they can do real good, as in opposing human trafficking. This is a long way from mopping versus cleaning. The leap seemed reasonable, the visual of a mop easier than some I might have chosen…

3 thoughts on “Mopping versus Cleaning, and more”