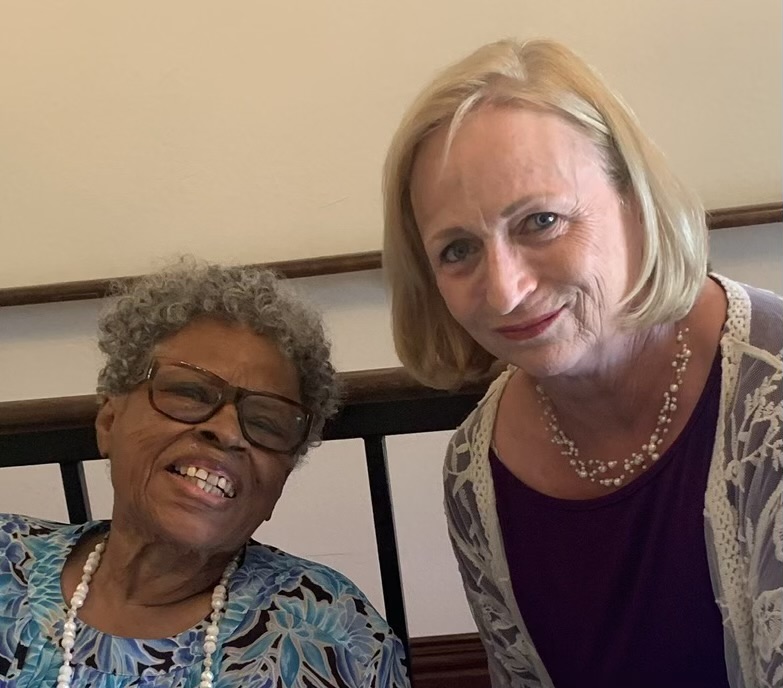 Last year, after the 5th year my church shared a Juneteenth celebration with our friends at Lifeway Church, I had a column about the history of that friendship in The Dallas Morning News. My blog the next day was not the column but a history of the newly-minted holiday and its champion, Opal Lee.

When I received an invitation to a scholarship program with Opal Lee as an award recipient, I was thrilled with the possibility of hearing her in person. True, she does live just next door in Fort Worth. And Karen Hollie, who pastors Lifeway, did meet her last year. It just never occurred to me that I would. My expectations were for a huge crowd in a megachurch. It was neither: perhaps 100 people in a neighborhood chapel with much of the time spent on the lives and accomplishments of the young graduates.

Ms. Lee sat across the aisle from us with her granddaughter and my long-time friend, Marzuq al Jaami. Before the service, I went over to meet her. Marzuq introduced me by religious affiliation, our interfaith connection, and my desire to have a picture with her. She was charming, took my hand in both of hers, and graciously agreed. A few hours later, mission accomplished.

Bud Kennedy, writing for The Fort Worth Star-Telegram last year, noted, “She is never resentful. She is resolute.” No, she is not resentful of the white rioters who burned down her home when she was 12. It did change the direction of her life, though. And “resolute”? An understatement. Here are Merriam-Webster’s synonyms: bent (on or upon), bound, decisive, determined, do-or-die, firm, hell-bent (on or upon), intent, out, purposeful, resolved, set, single-minded. Maybe all of those together would be enough. When Bishop Harold Edwards, pastor of The Church of the Living God, introduced her—and several more times during her talk—he asked if she wanted to sit down. Her answer was always, “No.” Resolute, direct, simple.

Last year, I had some her details out of order. She graduated from high school at 16. Her mother wanted her to go to college right away, but she got married and had four babies in four years. She then discovered she was going to have to raise her husband as well, “So I cut my losses and took those babies and went back to my mother.” College was a challenge, of course. She had to work, and hard. Part of the time, she worked back in Fort Worth, though sometimes her mother worked in her place “since we all look alike.” At 25, she graduated from Wiley College in her hometown of Marshall and began her career as an educator, later entering school counseling after earning her master’s degree at the University of North Texas.

Her first message to the graduates: You can achieve anything if you work hard enough at it. Listen to your parents. They have your best interests in mind.

After retiring, Ms. Lee learned that of all the accomplishments from the Black community in Fort Worth, not a single thing had been written about the people who had lived there for decades. So she helped found the Tarrant County Black History and Genealogical Society. She worked on Ann Richard’s campaign for governor. She walked 2-1/2 miles every year to commemorate the time it took the Emancipation Proclamation to arrive in Texas. At 89, she walked from Fort Worth to Washington, D.C., hoping to promote Juneteenth as a national holiday. Last year at 94, she was there when President Biden signed that action into law. Next week, she told me and Marzuk, she will be in Philadelphia.

Her second message to the graduates: Vote. Vote for change when and where it’s needed. Never give up. You can do what you set your mind to.

And, perhaps, never sit down. Keep going. You may be only one, but you are one. Keep going. Someday you, too, may get to meet a modern hero. Or be one.