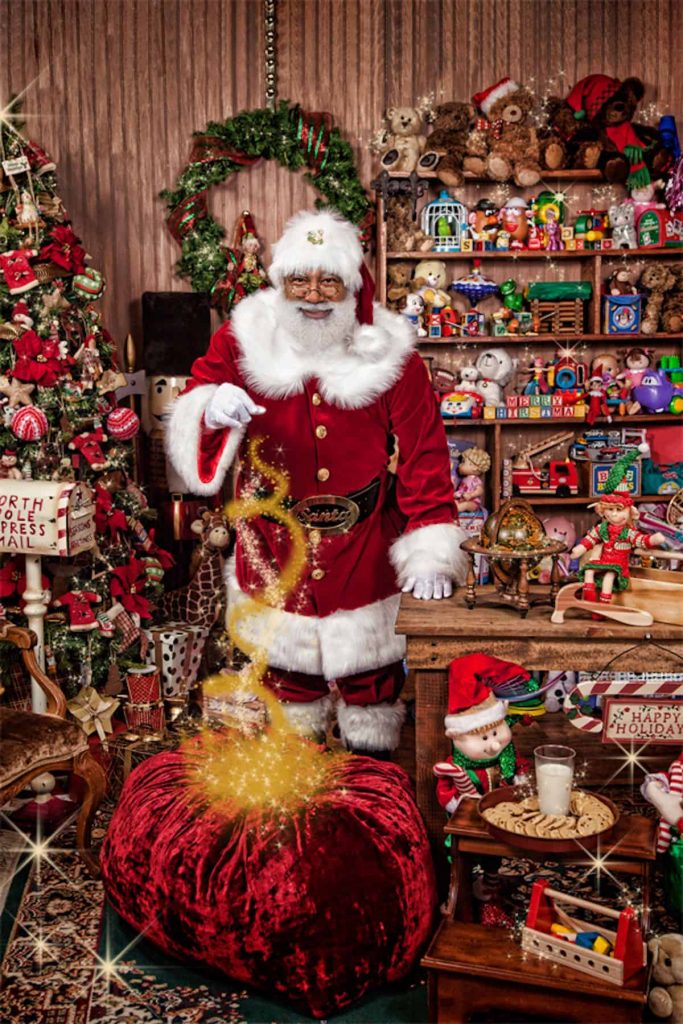 A native of Nashville, Arkansas, Santa Larry now works at the Duncanville UPS office, where our Mariah discovered him during hours of form signing and faxing. She came home saying she’d met Santa, with a literal twinkle in his eye. I believe (well, yes, that too) that his entire person twinkles: His laugh has deep tones reminiscent of theNorth Poler’s Ho! Ho! Ho! He has a beautiful beard. And he is quite famous. He allows that being the first African-American Santa at the Mall of America brought headlines, and still do. Interviews exist galore: NPR, The Undefeated, ABC13 in Chicago, NBC, The Daily Mail (UK), his alma mater Henderson State University, Tom Joyner, Texas Monthly, WFAA, Joy Reid, The Daily Show, Time, to name a few. This July 25 (!) on WFAA. Although this year will be a challenge, Christmas will come, and Santa will be here…and there…and everywhere. How does he manage? Santa has his ways. Why write about him in August in a pandemic in a time of widespread unrest? That “a” is intentional. Larry is part of a cadre of Santas through The Santa Experience MN. So while he is not “the” Santa, he’s going to be your favorite.

Rural Arkansas, a Christmas Eve years ago. (Santa is ageless, so we can’t say just when). A young boy sees it all:  Billions of stars twinkling, the grandeur of nature is on display. The lights from the house shed their warming glow. The scents of traditional family treats—German chocolate cake, strawberry cake, turkey and ham and dressing. He and his ten siblings have drawn names for gifts and must be creative to make up for the lack of worldly wealth. Sisters and brothers, grandparents and grandparent come together, “rich in God’s good grace and the true meaning of Christmas.” Christmas—always thrilling—was a time when he’d wonder what God would have him do.

When did our real Santa realize he was to be Santa? 1999. In the military (Army, a captain), he could not have a real beard so he used a pretend one and a $30 Santa suit. When he retired in 2016, our Santa grew a real beard and learned his craft in Santa schools in Denver and Dallas and Branson. Yes, he was a “meant to be” Santa, and the beautiful beard is a plus. Its colors do change from time to time, but Mrs. Claus does know how to tweak its magic, chemically speaking.

This year, ah, the differences. It’s not going to be wise to say Santa’s laugh is infectious, or that his kindness and generosity are contagious. No, Santa will be remote this year in order to protect himself and the children. He plans lots of virtual visits and will revamp his website to accommodate personal contacts instead of attending parties and visiting schools.

To say our Santa has been active is an understatement. Among his commitments have been the South Dallas community plus venues in New York, California, Chicago (Museum of Science + Industry), as well as the Mall of America.  He will appear in the 2020 DeSoto Christmas parade and for Williams Chicken at Change for Change at Southwest Center Mall.

These days, too, Christmas in July holds special meaning. Thinking the showing of A Christmas Carol (1984) on our interview day was providential, I learned from our Santa that several networks see this as a time to bring joy, peace, and happiness early. And perhaps we can add—always.

What about that nice vs. naughty issue? Santa Larry has the best answer ever: He tells children to CONTINUE being good. How powerful is that! No naughty children appear on his list—every child has some form of good in them, he emphasizes. But I added: Some children can be, well, challenging. Again, Santa comes through. At the Mall of America, his group has a special room reserved for special needs children, a quiet place where they can be safe and be themselves.

Christmas will always be with us, as will Santa. To Larry, that means “the gift we have already received which is our Lord and Savior, Jesus Christ.” Gratitude is always in season, he explained.  And I offered him a gift: Christmas is about the Presence, if not the presents. He liked it, I think.

Yes, Larry Jefferson was the first African-American Santa at the biggest mall in America, but that has never been his focus; “Santa doesn’t have a color,” he added. His goal is to be Santa for All. He hopes to include his Mrs. Claus in more outings so children can see her participation, working with him as a unit, as a father and a mother especially so little girls can identify with her.

It seems, then, a great circle: love and joy and peace and hope in the past, now, and into the future. It’s a hope not easily won nor even easily understood. The saint on whom our practice of gift giving comes—Saint Nicholas of Myra—lived in the 3rd -4th centuries, so not much is confirmed about him. Sometimes he’s called Nicholas the Wonderworker. Larry is one, too. He said in another interview he has changed the world. I agree.

Listen to two of his favorite Christmas songs: Jingle Bells and “Mary, Did You Know?” here with Patti Labelle (Is that Gladys Knight doing backup?) and here with Pentatonix. So enjoy, then go do some joy yourself.  Twinkling, if you can…