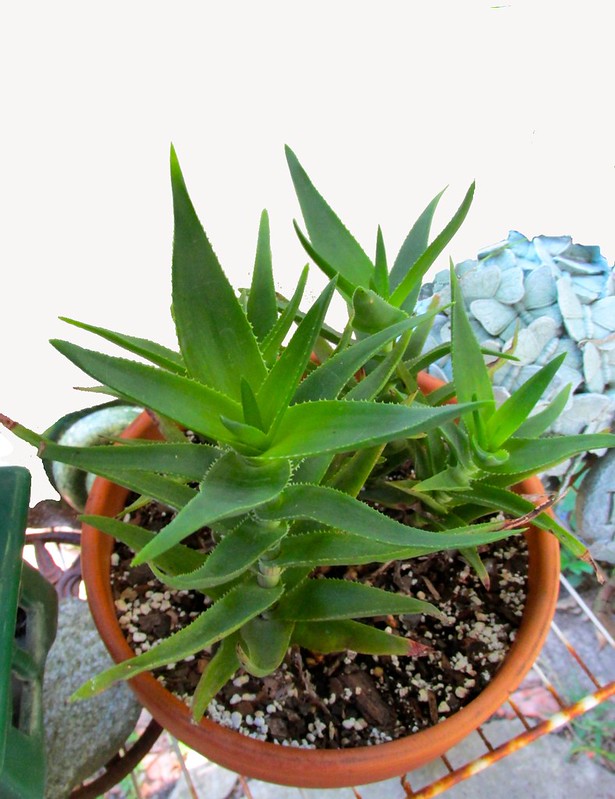 One grandchild–known in some circles as the CEO–issued this invitation recently: “Grandma, we’re going out to chase fireflies. Would you like to join us?” Perfectly charming, verbatim, and irresistible.

Words can charm, obscure, or confuse. One set of words I thought were charming turned out to be scientific; another seemed intended to obscure but became clear and specific; yet another initially confused but in seconds was understandable.

Recently a friend brought over a succulent called aloe ciliaris, labeled with the following description: “known to scramble upward.” Charming and completely fetching, that sweet green thing plant spiraling toward the sun. Metaphorical, even. With scamper a synonym. As it turns out, however, the phrase is simply descriptive of the scientific mode in which a climbing aloe grows. That the edges of its leaves are described as having “white, hairy teeth” defies logic. It was a bit disappointing that there was no poetry here, just precision.

The phrase “precise language” reminds us of Lois Lowry’s The Giver because the mother often used it to admonish Jonas. It always seemed a shame that the idea seemed good but the application bad in this novel. The passage below is from CliffNotes, not a reliable source obviously, but this catches the essence of what happens:

“The community that Lowry creates in The Giver stresses precision of language. Precise language, however, in this community, is not precise at all but rather is a language in which the meanings of words are intentionally unclear. For example, each family unit participates in the “telling of feelings” every evening. This sharing is ironic because the people don’t have any feelings. They gave up their feelings when they chose Sameness. Another word that is ironic and not precise is “Nurturer.” Jonas’ father, a Nurturer, is supposed to be a caretaker of infants. He does care for infants, but he also kills them.”

Still, a charming side note of The Giver—years ago, I was teaching this book in a reading class, a sort of remediation for hopeful almost-freshmen in college. They could read in the sense they were not illiterate, but they were not engaged with the written word enough to interpret what was being said. One student, an adult, told me he had never read a book but loved The Giver. Because my mentor had once encouraged me to write to the playwright I’d studied for my thesis, and because I’d received a great reply, I encouraged this man to do the same. He did, Lowry wrote back, and we were all happy.

Speaking of precise writing, the next passage is at once completely arguable in each sentence and the introduction to advice that is quite good. You’ll see at least some of my concerns with the paragraph and perhaps find the pointers in the link helpful:

“A writer’s job is to create meaning for readers. Expository writers in particular are responsible for clearly spelling out the relationships between ideas and for leading readers convincingly to a desired conclusion. In the business world that most students will enter, this reader-oriented, presentational writing will be in high demand. Even in college, when an instructor asks you to write 2,000 words, he means 2,000 good words. You must cut out wordiness and use precise language.”

One loves a good how-to list. What is there (other than art) something so human as instructions?

Going to the other extreme, the next passage appeared after the tragic helicopter crash that killed Kobe Bryant, his daughter, and seven others including the pilot:

“Contributing to the accident was likely the pilot’s self-induced           pressure and planned continuation bias which adversely affected his decision making and Island Express Helicopter Inc.’s inadequate review and oversight of its safety management processes.”

A simple translation: The pilot made a bad decision because he wanted to keep going, and his company’s safety policies didn’t help. It’s interesting to read the official report in full because of the depth of the precise language, though one puzzle is the turn of phrase “suffered a fatal injury.” Yes, reducing this to “died” would have been good, but it seems as if there is a paradox here between “injury” and “fatal.” Not to worry. The government has trademarked their system of definitions, known as Web-based Injury Statistics Data Query and Reporting System™. WISQARS. The government can work an acronym. On reflection, I came to believe that there could be an argument for this approach to language in general. It also lacks the poetry of “scrambling upward” but allows for a precision that “bad decision” makes judmental.

Lastly, the confusing but obvious. At the gym last week, I enjoyed the hot tub first, as is my wont. My joints have their pains, little or big, and the heat helps. I must have really winced several times because someone said, when we were in the exercise pool, “Do all your joints have arthritis? I saw your face.” On the surface, it makes no literal sense. How could he not see my face? What he meant, of course, was “You seemed to be expressing pain.” Well, not all my joints, just an ankle and a thumb. That day. Someone noticed.

We are all trying to communicate, all the time. Just when I think I’ve got it down, a failure ensues. We think we’re good at reading faces, but most of us fail most of the time. We’re so eager that we often finish one another’s sentences, a practice I try to avoid and urge others to as well. “I can finish my own,” I’ve been know to say, which we can agree is rude. It must be a life-long pursuit, this understanding each other. Texts are notorious, email not much better and lately not even acknowledged, and actual in-person conversation rarely avoids outside distractions. Maybe this is, in fact, the realization of that scrambling upward metaphor: we just keep trying, hand over hand, foot into mouth sometimes, word by word with apologies and all.

2 thoughts on “(known to scramble upward)”