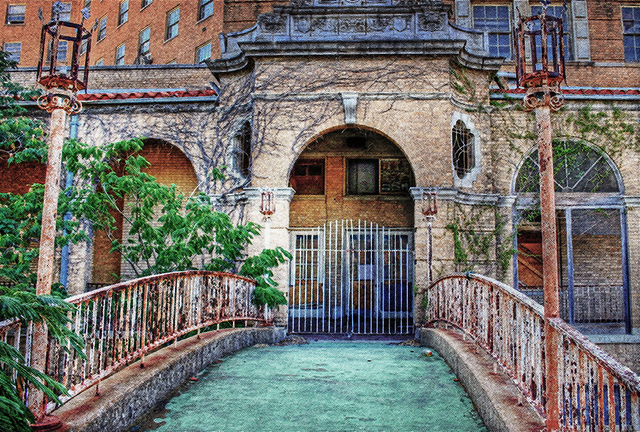 Have you ever been in the middle of a conversation with no memory of how you ended up on a certain topic? Since I am sure there are those among us who can’t remember what we had for breakfast, I’ll take that as a yes. So it was last week when I heard the story of the haunted Baker Hotel in Mineral Wells. A quick review on the internet showed that the stories were true in the sense that someone had told them, which will count for now. This article has lots of good pictures, but the writer doesn’t know the difference between “it’s” and “its,” which is really scary to me. Here the writer uses commas in odd, unreasonable places and random capitalization. Good information, historical references, but come on, people. Learn the rules. Several of the television shows that investigate such things with thousands of dollars of tech came to the hotel and pronounced it haunted, Ghost Adventures, for example. I don’t watch such programs because I find them tedious and the red eyes of the cast scare me.

As interesting as all this is, last week’s news is the natural segue. Virginia’s top three officials—governor, lieutenant governor, attorney general—all faced down ghosts from their pasts. First, Gov. Northam appeared to support infanticide of a child born after an abortion. That became less controversial after someone found pictures in his medical school yearbook of him (or not) in either blackface or a KKK hood. He apologized before deciding he was neither figure; later he admitted putting on “a little shoe polish on my cheeks” because he impersonated Michael Jackson for a dance contest. An aide lately has explained why this is offensive. When asked if he can still moonwalk, Gov. Northam appears to consider a demonstration at 3:15 in this video until his wife says “inappropriate circumstances” and he stops. The look on her face for the entire segment is priceless as well. Today—so many hours after the original haunting—he uses the term “indentured servants” instead of what he means: slaves. The interviewer says “Also known as slavery,” apparently in an attempt to prompt him, but that’s inaccurate too. The two terms are not interchangeable, and if there is a higher level of semantic juggling going on here, the historicity is beyond me. Opinions may vary.

Virginia’s attorney general admitted wearing blackface to impersonate a rapper in 1980. AG Herring was 19 at the time; he was not responding to disclosure but rather fomenting a pre-emptive strike, made necessary perhaps because he had called for the governor’s resignation. He must have had one of those “uh-oh” moments.

If the allegations regarding these officials seem ignorant or sophomoric or buffoonish, those against the lieutenant governor, Justin Fairfax, loom large and sinister. Two women have described sexual assaults and came forward when it seemed he might become governor. Today four top staffers resigned, and his law firm put him on leave. Grim portents indeed.

The Baker Hotel has a long history of dozens of ghosts, apparitions, orbs, ecto sprays, complete with noises and music, footsteps and fear. Exorcisms may free places and people from possession. What will work for these politicians’ pasts? Apologies seem ineffectual. Time passes and other bridges must be crossed (or walls observed, in El Paso).

Luckily, thankfully, these matters are for the people of Virginia to decide. The state’s motto—Sic semper tyrannis—“Thus always to tyrants” has a long and varied history. Perhaps it will find new meaning this week.