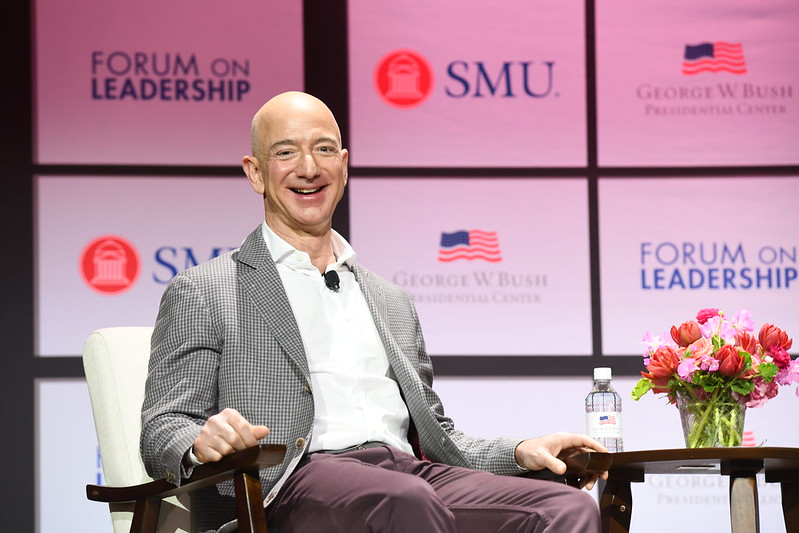 At 11 a.m. on Monday, April 12, 2004, I was in a taxi in New York City. Riding by one of those exclusive high-rise residences, I saw a middle-aged woman standing over to my right. She was well dressed and meticulously groomed. What I’ll never forget was her face: smooth, polished, burnished, perfect. I thought, “Wow. That’s what real money can do.” But she looked sad. That’s why I’ll never forget that moment (time of day approximate), and that’s when I stopped envying the rich.

Jeffrey Preston Jørgensen had much in common with the rest of us. His mother had him when she was 17, divorced after a year with his father, married a Cuban immigrant when Jeff was 4; the step-father soon adopted the child and changed his last name to Bezos. The family moved around a bit: Albuquerque, Houston, Miami. Jeff worked at a McDonald’s. He was the high school valedictorian (no, I wasn’t either, but I’ve known some). When he got to Princeton, he decided his choice of major (physics) was too hard and changed to something else (electrical engineering and computer science). Even if he is a genius, he has limitations. He is a long-time fan of Star Trek. He married, had children, divorced. He named his new company Cadabra at first (as in abracadabra), but it sounded like “cadaver” on the phone. He chose Amazon because it started with an A, because of the river, and because it sounded exciting and exotic. Just as any of us would have done.

On the other hand, there are many things about Bezos that are remarkable. When he was a toddler in his crib, he used a screwdriver to modify it and designed an alarm system to know what his siblings were doing. He was so focused in kindergarten that his teachers would have to pick up his chair with him in it to move him to the next activity. He memorized all the defensive football plays and was put in charge of that side of the team. (An interesting article here.) His maternal grandfather was a regional director for the U.S. Atomic Energy Commission; his stepfather, an engineer for Exxon. Yes, he and his wife of 25 years divorced, but the Saudis outed his affair and National Enquirer did an exposé. There may be a link between that incident and the murder of Jamal Khashoggi, a Bezos-owned Washington Post journalist. He just donated $200 million to the Smithsonian Air and Space Museum, the largest gift since James Smithson’s founding donation in 1846. If my math is correct, that is about .001% of his fortune, which is like someone with $50,000 giving $50.

While building a business from scratch in your garage sounds average, no retail enterprise on earth comes close to Amazon. Yes, he likes Star Trek. Who doesn’t? But he got to play an alien in Star Trek Beyond, thereby checking that off his bucket list. Chris Pine said this: “I was there for the bit with his, like, nine bodyguards and three limos. It was really intense. … I had no idea who he was. Not a clue. But he was obviously very important.” Important? Incredibly wealthy at least. Finally, he gets to go into space briefly on July 20. On the rocket his money built. Which may change space travel as we know it. Other than that, he’s just a regular guy that Chris Pine didn’t recognize.

At 4 a.m. one day (time of day accurate), I ordered three cable management kits from Amazon. They were on my porch by 7 a.m. How is that even possible? Amazon makes shopping—and shipping— a totally different experience than only a few years ago. I even remember when only books were sold, a boon to my college freshmen. Now, I rarely buy anything without checking Amazon first. I know only one person who doesn’t shop there purposefully; this site and this give valid reasons. Wikipedia has an entire entry (with 237 reference links) titled “Criticism of Amazon.” A few days ago, President Biden signed an executive order regarding mergers and monopolies which will ultimately affect Amazon. And 159,598 people (when last checked) have signed a petition asking that Bezos not be allowed to come back from space. Apparently, lots of people still envy and/or hate the rich.

The upshot of all this is the feeling that I am probably not the one to write Jeff Bezos. I have because I said I would. I hope he and the others make it home safely. Maybe one of you has something more to say to him than I could manage. If you don’t know who Wally Funk is, you need to. She’s our neighbor over in Roanoke. After tomorrow, everyone will know her. The last words below, by the way, are Bezos’s mottoes, the second in Latin—Gradatim ferociter. Maybe instead of all those billions we’re not going to get, we just need to get ourselves a Latin motto. Maybe Excelsior! New York has it, Stan Lee used it, but ever upward is the place to be.

Congratulations on so many things: retirement of a sort, a realized dream of a trip into space, and the service your company gave during the pandemic. Best wishes to you going forward.

Thank you for inviting Mary Wallace “Wally” Funk along on your flight. No one would have said anything if you hadn’t, but so many of us are thrilled that you did.

Recently at a party, someone stretched our perception skills to visualize a trillion dollars. It’s staggering. The prediction, predictably, was that you would be the world’s first trillionaire. What came next, predictably, was the suggestion that no one should have that much money. I defended you, suggesting that it is none of our business how much your business is worth. Some see the economy as a pie, with a limited amount of wealth that must be divided. Mark Hennessey used a different metaphor. He described the economy as a garden that must be tended in order to prosper. The result is not a piece of something limited but a stake in something that can provide for all.

That said, it is also important to share what other people are saying. Some who are bothered by the money (you really did work hard for it) suggest that the money does not give you the authority to set priorities for the rest of us. At times, offering an opinion on the lives of others offends. The phrase “Keep on your side of the street” applies. What you’ve done, you’ve done extremely well. We see; we admire. Anything else is not needed.

Amazon offers excellent pay and benefits. With 1.3 million (and counting) employees, this will always be important. No one can plan for the bad optics of an occasional anecdote. However, when too many people say “I heard Amazon doesn’t give bathroom breaks,” that’s what people remember. Encourage a business culture that reflects caring for the individual beyond pay and benefits.

It is incredibly presumptuous to offer you advice—so many sentences with an unspoken “do it this way.” You’ve changed the world. When you see the Earth this week—the world you’ve changed—you will see in those few minutes a beauty the most of us cannot imagine. By report, those who have find the experience humbling. It’s more than an item off a bucket list. It’s a real accomplishment. As you minimize regrets and tread step by step, ferociously, I and millions of others will be thinking of you.