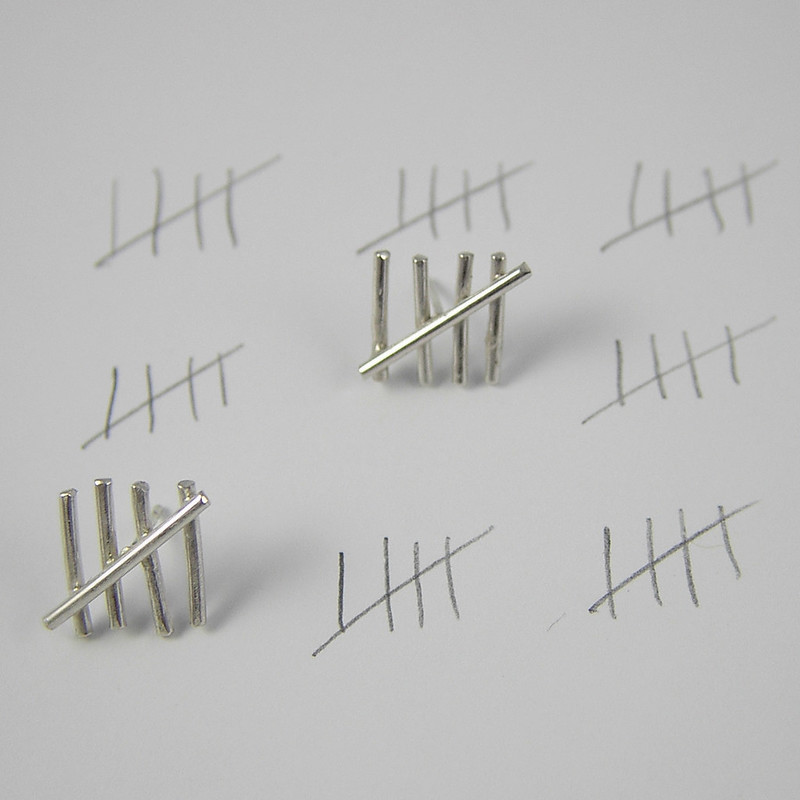 Until recently, I didn’t know this function had a name. I don’t remember when or where I learned the action. Who knows how many cartoons or other representations of it there are. This one from a deadly beach in Hawaii is chilling, but it’s not accurate, just scary. And I just learned that the pattern isn’t universal. In France, Spain, and Brazil, a totally different set of lines is used; a box is drawn with a cross for 5.

A favorite insight: Tally marks were needed as “counting aids other than body parts.” Hence our system of tens. How many times have you said or heard, “I could count on the fingers of one hand…”?

The action is repetitive, whether or not we’re counting down a prison sentence or up a game score. A friend once used the phrase “Life sometimes gets so daily.” The context is lost; perhaps I was complaining. But it stuck. I don’t know that I ever heard it from anyone else, so in researching it, I learned that only a poem by a Texas poet named Albert Huffstickler has that as a name. His papers which include thousands of his poems are in the library at Texas State University, his alma mater. A researcher can go there and, well, research his work. (I’ve done that with Ernest Hemingway’s work, believe or not, at the University of Texas. Long story. But it was something to sit with only a few millimeters of plastic separating me from his pencil marks.) Huffstickler and I probably crossed paths when he lived in Austin, too. His poem “The Cure” ends like this:

“Wisdom is seeing the shape of your life
without obliterating (getting over) a single
instant of it.”

More poems are available here. This is a brief (<6 minute documentary) about him. It’s like getting to know him, just a bit. Sometimes life enriches us, meeting someone new, even if he’s been gone almost 20 years.

The opposite of things getting repetitive is things getting remarkable. A website called Atlas Obscura offers newsletters to your email. It’s a quirky travel company, technically, but the “obscura” part has to do with the unusual places they explore all around the world. And even in this country. I prefer their podcast, though. This week “The White Squirrel of Prospect Park” was particularly charming. In a Brooklyn park lives a white squirrel, not an albino, but an animal with a recessive gene that renders his/her coat white. Says one of the crew looking for this special creature’s den: “It’s not on any map. True places never are.” In our old neighborhood, there were two such squirrels, but they were albinos. And then they were gone. I don’t know what happened to them, but we grieved their loss. Perhaps you’ll be interested in the episode about the donkey on whom the donkey in Shrek is based, whose name is Donkey, voiced by Eddie Murphy. At about 15 minutes, these podcasts do take one to other places to learn the little wonders of the world.

Strictly speaking, this week was supposed to be about last straws, as in the one that broke the camel’s back. I’m hearing that phrase a lot lately, often associated with the return of masks, at least potentially. But where or what is our last one? How far do we go until we can’t?

The Latin phrase non plus ultra can mean two things: “the best, nothing better” or “no further, nothing beyond this.” It was inscribed (mythologically speaking) on the Pillars of Hercules at the Strait of Gibraltar, considered the edge of the world: “(Let there) not (be) more (sailing) beyond.”

Here’s the thing, though. Spain, on which half of the Straits sits, used to have the whole phrase as its motto. However, having sailed beyond theirs to our continent, they thought to change it to Plus ultra, here on their coat of arms. It means “further beyond,” a place that may be better for us to contemplate that the burden on that poor camel’s back. My own outer limit hasn’t been reached, but sometimes I’m close, if not rude, then challenging: “But we’re outside!” Maybe I should be exploring control and manners instead of what will finally break me.

2 thoughts on “Crossing the Tally”