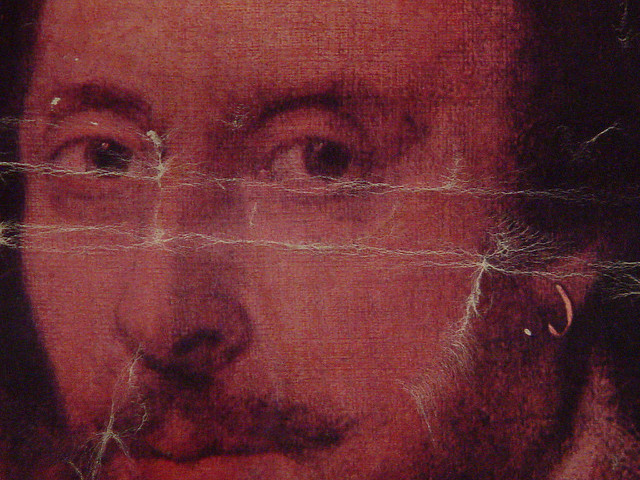 Yes, it’s true. First cousins no less. Perhaps you’ll see some resemblance in this old family pic. Removed by 13 generations, Will and I share the same set of grandparents in Robert and Mary Arden. Their daughters, Margaret and Mary Arden, were then our respective aunts. We see the generations unwind—daughter Margaret to son Robert to daughter Mary in a progression that looks like this: MFMMMFFFFFMMFMF. All the while there sits Will as my family winds down through the ages on my mother’s father’s mother’s side. That great-grandmother, Olive St. John, died the year I was born; she herself was born in 1871. Now the family line has a long history in this country, leaving Merry Olde England in 1627. No opportunities for family gatherings with the Shakespeares apparently.

Only three kinds of questions are possible: What are the facts? What do they mean? How do you feel about them? The facts you have, and probably too many of them. Implications of said facts? Harder to say. Although I didn’t know my great-grandmother, I knew her sister Maggie quite well. She tried to teach me piano but had a degree in piano herself from Baylor University, a fact I didn’t know until I googled her name looking for her first husband. Once she decided we must have cow brains and eggs for breakfast, so I spent a sleepless night waiting for the horror, which I could not eat. She was disappointed. I rather liked her turnip soup, which seemed old-fashioned even then. On the modern front, she kept Tang, a treat we liked to sneak. The meaning of all this has nothing to do with soup or brains: The past is not so far off as we imagine. If I knew someone born in 1879, she could well have known someone born in the 18th century. That 13 generations begins to look smaller. One of the grandparents whose people had come from England is buried in Lynchburg, Tennessee, about an hour from where we saw the eclipse. Time and space narrow. The great man and I are not so far apart after all.

How do I feel about this news? First, I’m not bragging. I can’t write like WS, or act. But I can enjoy his work, most recently The Tempest at (insert shameless plug) Shakespeare in the Bar.

Second, you almost surely have some cool cousins too. The website I’m using is called RelativeFinder.org. It connects to my genealogy via FamilySearch.org. Both are free. It’s not new, launched in 2011, but computer science people being what they are, the connections now match you up with famous people, with categories such as Authors and Poets (I’m guessing Bob Dylan would be here if we’re related, per the Nobel committee. Quoting John Donne, he said this:  “I don’t know what it means, either. But it sounds good. And you want your songs to sound good.” His Nobel lecture is here though I’m not sure he explains his win. But I digress.) Famous Americans, presidents, Declaration signers, and so on. While I am not totally convinced of the accuracy of all this, it does make for some fun.

Third, the interconnectedness of everything comes around again. My husband, with his profound brain injury, lost the ability to filter subtleties. After watching Cloverfield, he announced that the monster was obviously a baby and Manhattanites are most frightened of babies. Well, maybe so. In Sunday school, as we were starting the Old Testament begots, he announced several times that we were all cousins, right? Well, right. We are. As it happens, we are related to 37 of the 45 American presidents. Not the current one, but the last two. Amazing, when you think about it.

Nelson Rockefeller, 41st Vice-President, had a catchphrase that was so much used the press had an acronym for it: The brotherhood of man under the fatherhood of God (BOMFOG). Regardless of your belief system, this is just a fact. Its implications and your feelings? Right.

1 thought on “My cousin, William Shakespeare”