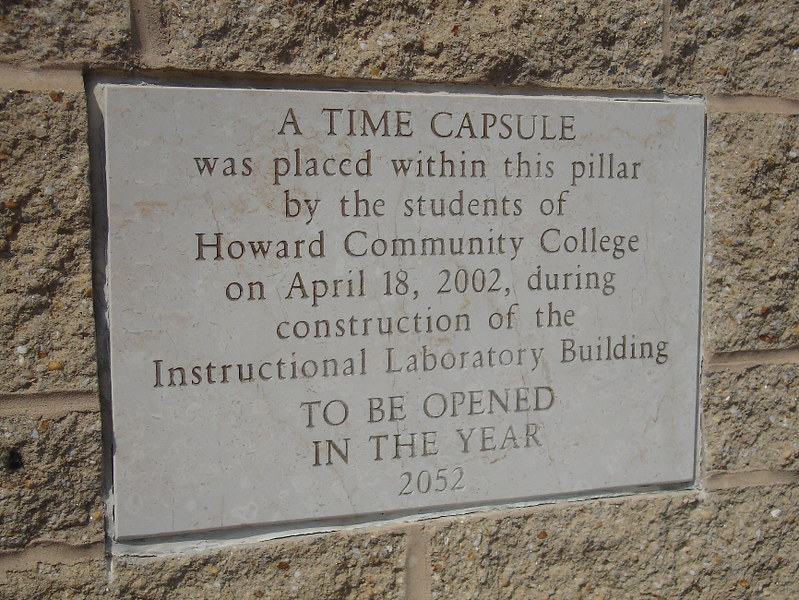 Strictly speaking, I already live in a time capsule, just not a buried one. Moving house eighteen years ago, I picked up a yellowed envelope from the garage floor and opened it to find the birthday card I’d made for my grandmother when I was five. Where had it been in the decades previous? No idea. How did it come to be at that spot at that minute? Clueless. Oh, for an organized life. Cleaning any closet results in such discoveries. A few weeks ago, I came across a rather dear Dear Santa letter my youngest “sent.” He asks for special gifts for others when he was about seven, reflecting an admirable quality at any age.

What I seek now is a way to remind my future self (tomorrow, next week, next year) to remember what I know now but will have forgotten by then. About yearly, I get a series of three shots in my right knee. (Another issue: right vs. left. My husband’s doctor came in to ask which eye he was about to repair. “The left?” I replied, “Right.” His response: “Don’t do that to me.” Then I got it.) When I was in for the procedure, first the nurse asks me to hop up on the examining table. There is no hopping. Lug, heft, even elevated crawl might be more appropriate. She puts the 6-inch-long needle assembly on the counter. I exaggerate slightly. Then the doctor cheerily enters and asks if I am ready. I am not ready. I am in full dread mode. But here’s the truth: It’s not at all bad, perhaps two seconds of a mild pinch. By the third one, with relief in walking already beginning, I may not be looking forward to the shot, but my fear has faded. I ask the doctor to remind me next year. He laughs. There will still be no hopping, but maybe I can be more ready.

Fear aside, I also wish I could learn from prior mistakes by reading some sort of warning before I embark on certain projects. “Don’t skip steps,” a motto that has carried much success, obviously was based on the times when I did skip steps. Of all the things people say to us, I wonder if we would listen if someone began, “You know, the last time you did ___, there was that terrible outcome.” But no. It’s not so much that those who don’t know history are doomed to repeat it; it’s as if somehow we suppose that having moved through some time, results will differ. Second clichéd response: The definition of insanity, same action expecting different outcome.

The phrase “time capsule” is rather new, from 1938. (Sorry for the lack of transition.) While humans have long preserved caches of relics, apparently the actual practice of preserving in containers began in the 18th century. World Fairs are a phenomenon now called expos. Dating myself, I was taken as a child to the 1964 World’s Fair by my great-aunt, a travel agent. The theme was “Peace Through Understanding.” Occasionally, some picture or memento will float to the surface of my home capsule.  In Texas, we have the Don Harrington Discovery Center with four time capsules in place at its Helium Centennial Time Columns Monument. Apparently, helium was discovered in 1868, so the monument celebrates that anniversary. I’ve always thought it odd that elements are “discovered,” since they have been there all along, but that’s another topic. There is also an organization dedicated to tracking time capsules. My garage is not included, though time capsule William Jarvis notes that most capsules are “useless junk” which does include said garage.

The year 2020 offers so many possibilities for items as to venture into self-parody. Toilet paper memes abounded for weeks. Sourdough starter wouldn’t live, of course, but recipes could go in. Masks, obviously. Unused wedding invitations, cruise tickets, movie passes. CNN has this handy-dandy piece on where to buy your capsule and what to put in it. (Binged media like Tiger King! not)

In my mind, the mack daddy of all time capsules are the golden records sent in the Voyager space crafts in 1977. Unlike missions to Mars or Jupiter, neither has a destination, as they were sent out in a hopeful exploratory gesture. Each record contains music, pictures, greetings in dozens of Earth languages, and illustrations, all carefully curated. I remember someone saying that Bach is there, but that’s bragging. You can get an overview here and listen here. If beings ever find and access these 12-inch treasure troves, I wonder if we will be but a memory. No, wait, I remember—that’s too grim a way to end. I’m reading Animal Farm for next week. History and truth and cycles—no need to be reminded about that, or is there? Dear Me: Think.