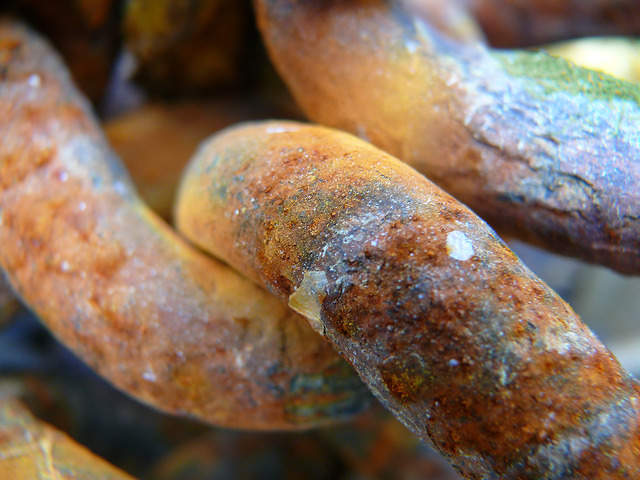 As I waited for a repair in a small jewelry shop, a woman came in with a gold chain she had purchased a year before. Her distress was clear. She asked immediately, “I thought you said this was gold.”

The jeweler, ever the salesman, replied, “Yes, you chose a good piece there.”

“Then why did it tarnish?”

Pure gold doesn’t tarnish. Indeed, that has been its appeal through the millennia. Pieces retrieved from Egyptian pyramids and Greek ruins, Mayan tombs and Celtic hoards all sparkle and glow. In our age, the gold that we wear is hardened with other alloys. The purest gold is 24 carat, but it’s too pliable for regular jewelry, so soft that it would pull apart (I had a 24 carat ring once, inherited from my great-great-aunt. For some reason, they gave it to me when I was 10. After several repair episodes, my little ring became part of a house foundation because I played in some construction sand during the build.)

Our erstwhile consumer had purchased a good piece of jewelry, but it was not pure gold. The jeweler had been in business long enough to know not to argue. He began a careful exploration of the facts to get to the root of the problem.

Have you been taking any new medicine?

Have you sprayed it with hairspray? Perfume?

Have you been around turpentine or any other strong chemicals?

Have you worn it when you were sweating?

Have you been swimming with the necklace on?

To each of his questions, the woman answered “No.” Sometimes there was a brief discussion. He clearly knew the causes of potential harm to her necklace. Sometimes the woman would remind him that he had told her the piece was good, and he would respond calmly that it would remain a good piece.

The jeweler was, to the best of his ability, being scientific by trying to rule out the reasons that the necklace might have tarnished. She, understandably if defensively, was emotional. He assured her that he could restore the shine to her necklace. Nothing much seemed to satisfy or interest her but the promise of renewal. He took the piece and cleaned it, then buffed it with a soft cloth. He told her that he might need to keep it for more intensive work if these methods did not work. A soak perhaps.

Friendship is like gold. At a recent memorial, one man said this, “Friendship is the most precious experience of something beyond the material world that I know of. It is infinite, eternal, and rare. A friendship that transforms itself as it allows for the transformation of its inhabitors is rarer still…” What a perfect description for nourishing and maintaining a relationship. It’s easy to let it tarnish. The questions the jeweler asked can apply: Did you let something on or in? Swim somewhere you shouldn’t? Change?

This weekend we were driving through the Hill Country when we spotted a sign that said “The Home of Once Was.” A rather poignant tag for the town of Lott, Texas, or Travis; the sign didn’t say. With a little research, I learned that these little towns never had been much. Small populations that peaked at 900 or so, now down 60. But the phrase is catchy. It would be a great short story title for another time, though sad.

We protect that which is precious. Friendships can’t always be repaired, unlike gold. Human hearts are tender. Better not to say of a friendship that it “once was.” Better to love well, keep love well, and say it well.

2 thoughts on “The Tarnished Necklace”