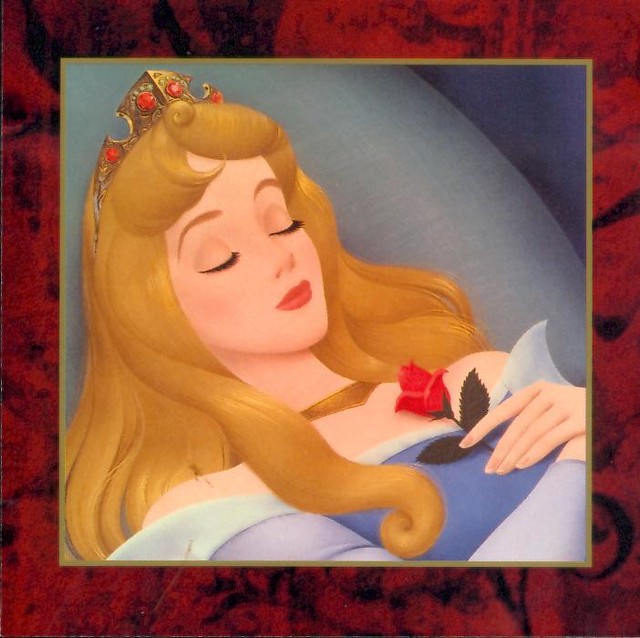 Sunday morning last week, my husband became quite ill and had to be taken to the emergency room. I thought we might lose him that night. The next morning he was better, and the next. The world changed quickly, however. On Wednesday morning I woke up to the possibility that I wouldn’t see him alive after 8 a.m., and the distinct wish came that I’d rather sleep through the rest of our troubles. That’s a natural reaction; I can’t apologize for it. So I dutifully went to the hospital before 8, fed him breakfast, talked to apologetic hospital staff who were shutting the place down, and left. He would not go back to his residence until Friday afternoon, a place also closed to me.

That aside, I thought of Sleeping Beauty. That’s not her name, of course. Strictly speaking, she is THE Sleeping Beauty, the name of the fairy tale. Her name (at least in the Disney version) is Aurora, from Charles Perrault’s adaptation, which you can read here. It’s charming, and while the Disney changes are obvious, and some don’t completely make sense, they stay true to its spirit. Peter Tchaikovsky’s ballet uses the same version but adds lots of dances with other fairy tale characters like Little Red Riding Hood (whose name may have been Blanchette; this WPA poster from the 1930s is cool, though in Perrault she ends up eaten at the end of the story), four other suitors, some cats, and the Blue Bird. One final note: The theme song “Once Upon a Dream” throughout the Disney movie is actually from the Tchaikovsky—listen to them side by side here. If you want to watch the entire ballet, you can enjoy it lots of places. It’s interesting to watch as the same choreography is used, again something I didn’t know much about: The Australian Ballet, the Bolshoi, Italian, and a tiny trailer for the new Bolshoi version that was in theaters. Back when we went to such things…

Far afield, I know. I had to review the story so I could decide if it is a metaphor for our time or not, with one thing leading to another. I’m thinking it’s not. What happens in Disney and the other versions involves not only Aurora sleeping for many years but the same happening to all her loved ones. They pick up where they left off after true love’s kiss. In addition, the fairy who prevented Aurora’s death by blessing her to sleep (The Lilac Fairy or Merryweather) allowed them all to dream. But they missed everything else, all the reality that gets so daily.

So, what would we miss? The isolation, the deprivation, the losses. News of the hoarders (an Australian store accepting toilet paper as currency) and the scammers (targeting the vulnerable elderly, as usual, special place in Hell reserved, as usual). Fear of fear, most famously articulated by Franklin D. Roosevelt: “This great Nation will endure as it has endured, will revive and will prosper. So, first of all, let me assert my firm belief that the only thing we have to fear is fear itself—nameless, unreasoning, unjustified terror which paralyzes needed efforts to convert retreat into advance.” You can read the entire speech here. It’s important to remember that this was 1933, well before the war that was to come. The country was in the midst of a Great Depression (good source including pictures here.) Deprivation, loss, isolation were very real.

What will we gain? Hard to say, but I thought of Mr. Rogers: “Because if you look for the helpers, you’ll know that there’s hope.” In this 58-second clip, we hear him as an older man retelling what his mother taught and extending advice for news media, suggesting that rescue teams be included in reporting disasters. That does happen so often, and I wonder if they took him to heart or just instinctively knew to do it. Children need comforting. We all need comforting. We give it when we can, but we should also accept it and even seek it when we need it. Lists of what to do when isolated crop up. More people than ever are on FaceBook and other sites, connecting and making the best of it. Creativity abounds. Families cook together again. Abandoned projects are reconsidered. Houses cleaned, gardens planted, dogs walked. The sweetness of life is savored.

In whatever form we choose to take it, Eden was a paradise of bliss through ignorance. We chose to leave, making the decision to endure the bad so that we could know the good. So that we could experience not the eternal nap of a cat, not caring which week it is or who feeds us. It was a kind of sleep, then, that we reject every day we wake up to life. We will see goodness.

When I was leaving the hospital, I saw a van with this message: “Until we meet again.” I smiled. Someone up there knows me and loves me. A tender mercy or a random coincidence? It doesn’t really matter. I’m not sleeping through this, although the occasional nap is a good thing.

17 thoughts on “The Sleeping Beauty: Not a Metaphor for Now”