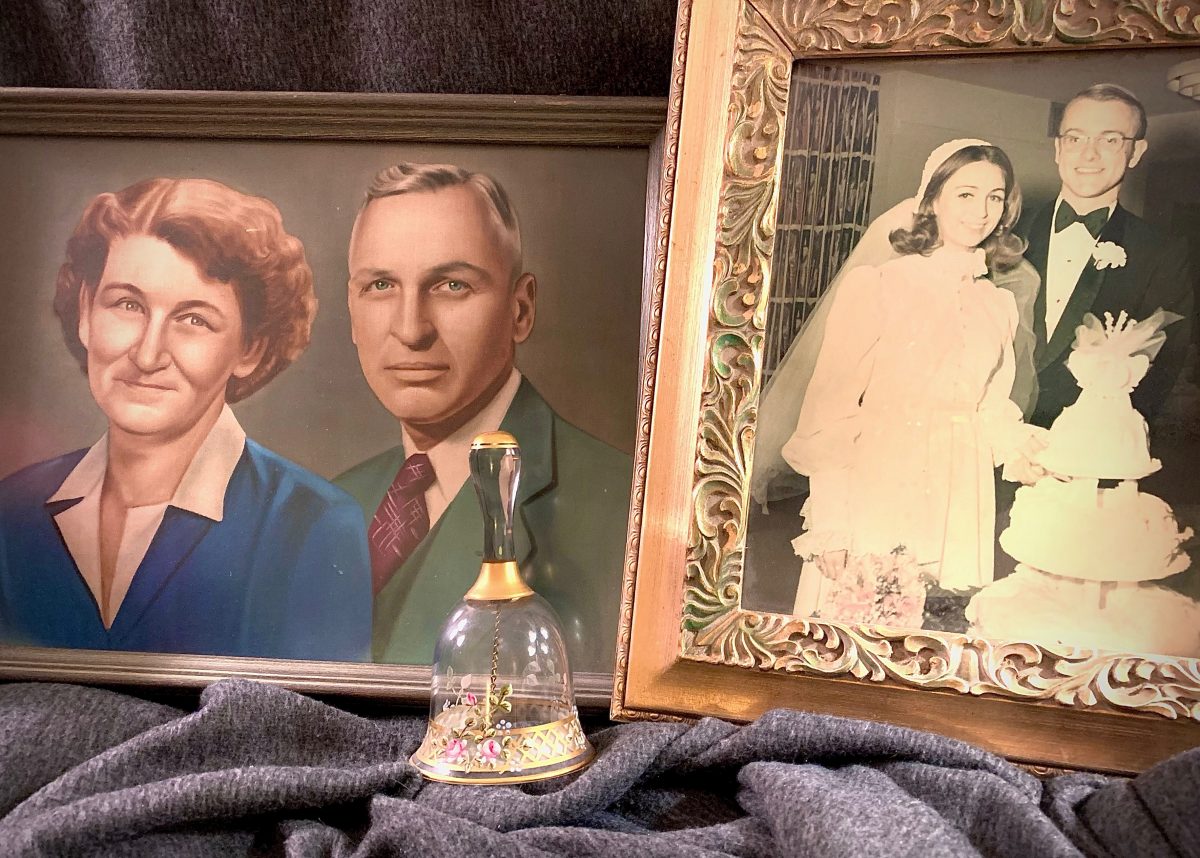 Ruth Dildy and Russell Trimble married on Christmas Eve, 1919. He was newly back from the Great War, stateside assigned. She was not long out of college with a history degree. Perhaps she’d taught a year. Letters between the two were private but show his ardent affection, his hope of a return, a mournful declaration of eternal love if he were to die. Besides the battles, of course, the Spanish flu raged, killing many more–20 million from the war (military and civilian) and 50 million from the virus. Sobering, desperate times.

We have no pictures from the affair. Her wedding shoes survived for decades. Tiny, pointed, cream-colored leather, and laced, they were not for play, tucked into a trunk in a basement. Nothing else commemorated the occasion except a wedding dinner bell, with gilded edges and painted pink roses, handled gently for another hundred years.

In the 1920s, four children were born. A girl, then another. The second would die of typhus the day before her third birthday; it was the same illness which would kill Anne Frank in 1945. In those days, the dead of a family were laid out at home. This beloved toddler was buried in the new blue taffeta dress Ruth had just finished for her; a lock of her pale blond hair was secured in a diary. The young family, overwhelmed by grief, could no longer live in the house and built another where members remained for 70 years. Twin boys came along, mischievous and lively, at the new house.

Of the three children, two would marry, one of those having four children. In 1969, for their 50th anniversary, Ruth and Russell held a family dinner. The meal was roast beef and vegetables, with the pièce de résistance a white layer cake with frothy frosting, decorated with pink roses. The grandchildren, in Sunday best, still young, from 9 to 19, sat at the children’s table. Silver, crystal, linen tablecloths for all, of course.

Ruth would die before the next year was out, Russell surviving her almost three years more. One twin would pass, then a grandson. Then their daughter and the second twin would go. From 1919 until then, we had begun to fly in earnest (Ruth preferred trains when those were common) and been to the moon (though none of us, yet), extended the vote (to women, first) and then to all (in Texas, sometimes including the deceased), introduced antibiotics (late 1928 discovery) and seen them expand (but not widely until 1945 and after). Telephones were cranked, then dialed and attached to a wall, then mobilized and then celled. Television would come with a station, then two, then a dozen, then hundreds. People talked and shouted, cried and regretted, observed the sun and the weather, married and celebrated anniversaries.

Mary Ann Sprague and Jerry Taylor wed January 9, 1971. He was to be off to war, not Vietnam which raged but nearby Korea. She had finished the third semester of a music degree. Letters between them, now lost, were private and never read by others. We have many pictures of a young woman, a just older man. The shoes are gone, but the dress—lace, Victorian sleeves and high neck, sewn by an elderly seamstress—lies folded in a sturdy white box on top of a shelf. Never played with, not so fragile now but a bit yellowed. The pink rose bouquet is pressed, shower lists are recorded. Lists of guests and gift-givers bring memories of college friends, kindergarten friends. The music was not recorded, but the titles remain: Malotte’s “The Lord’s Prayer,” Jeremiah Clark’s “Trumpet Voluntary,” and Purcell’s “Trumpet Tune,” with the prelude and postlude the organist’s choice from Bach, only. A reception, a white cake with fluffy white icing, pictures of the parents, the grieving grandfather. A honeymoon to Santa Fe, with a stop in Lubbock for Chinese food, a magician to charm. Back to school, off to Korea, February for him, July for her. Back to school again. Jobs, houses, children (three boys). Cars, many cars.

A terrible fall for him in 2004, before Christmas, with the next anniversary at the hospital. Slow walks down long corridors as speech returns, most memory, some thought, filters lost. A different life for her, caregiving then coordinating caregiving then watching a long, long decline. And then he is gone, July before the January.

So, no party for all, no celebration for what would have been the golden. A visit to a cemetery to see a carved named, a date, Army, SP4. Barely tears. For there is separation, but not loss. A glimpse of eternity, parted by time but not undone, not unwed though not yet sealed—that comes next July. Sometimes the gentlest hint of a presence gone on, just there. Waiting, patiently, for another processional to a quieter tune.

Two weddings, a century and some apart. A family of lives, between. Profound sadness, but also hidden and unexpected joys. Light and love, where no one else can go.

3 thoughts on “The Golden: Thoughts”