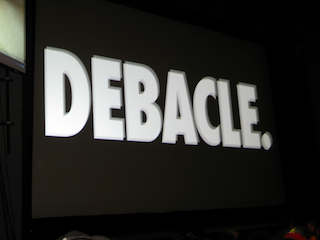 I don’t know what we were talking about, but I said the word “debacle.” Until that day in my life, I’d pronounced it “DEB-a-cul.” Or in the formal schema: “ˈde-bə-kəl.”

I repeated whatever was the disaster of the day.

“DEB-a-cul? That’s how you say it, isn’t it? Or a second pronunciation? Maybe?”

The answer was no, that’s not how you say it. I checked. He was right. My way was the dread “nonstandard,” itself defined as “not conforming in pronunciation, grammar, vocabulary, etc., to the usage characteristic of and considered (therefore not) acceptable by most educated native speakers.” Emphasis added. Yikes and ouch. A most humbling experience if you (I mean me, of course) suffer from the vanity of thinking you can pronounce words.

Two brief examples: I do say “preparatory” in the second pronunciation, which is with the accent on the first syllable. With work, I could do it differently. In the past few years, I’ve taken to pronouncing “maraschino” with the “sch” as “ske” instead of “she.” That is the correct, first pronunciation, in fact, though sometimes people look at me oddly. Maybe no one else knows the correct pronunciation? Maybe I’m just being affected/snobby/weird? Or both. Probably both.

Here is a list of 100 mispronounced words, arranged alphabetically for your reading pleasure. I pronounce “mauve” correctly already (au=oh here) but not “diphtheria” (not dip but dif); good for “often” (the t is silent) but not for “parliament” (the i is actually pronounced); yes for “pronunciation” (which loses the o) but not—nor is anyone else—for “pernickety” (there isn’t an s).

Introducing the topic to others, I learned other examples, mostly from personal irritations. More than one person used “chester drawers” for years until someone explained it is “chest of drawers.” Someone else recently heard “iteration” as “eye-teration.” A musician once had a student, a good one at that, who asked to play “Ratch-maninoff” instead of “Rock-maninoff” for the beloved Rachmaninoff. Everyone gasped, of course. Perhaps you have your favorites.

None of this matters in the great scheme of things, except for one very peculiar associated phenomenon: In the weeks since I was corrected, I have heard the word “debacle” on television, radio, or a podcast every day. Every. Single. Day. That seems incredibly odd. I’m not exaggerating, as I’m wont to do. So I noticed on Tuesday, by 6 pm, I hadn’t heard it. And that wouldn’t have mattered except I was scheduled to play for our dear Mu Phi Epsilon group. What if I was to be the debacle that night? In a fit of superstitionist thinking (not a word so pronounce it as you like), I told my story to several people and got them to say “debacle” if it wasn’t going to be broadcast.

These are my pieces: Debussy’s “Syrinx” and three of Hindemith’s “Eight Pieces for Solo Flute.” (Only 1, 2, and 6) This flutist plays well and has 1M views but moves a lot. Unseen flutist with the score, maybe a little too opinionated. The iconic Jean-Pierre Rampal in a 1957 videorecording, but a bit too fast. Emily Beynon giving a tutorial, with a good performance beginning at 18:45—everything you need to know about the piece which is a little over 2 minutes itself. The Hindemith is much more angular or modern in its variety, but it’s a good companion to the French piece. Here is a student at Peabody Conservatory, Eunsin Kang. Another unseen flutist, with the score.

I did ok when I played. People said it was good. I sighed with relief. Not perfect, but not the debacle it would have been if I hadn’t practiced heavily. I am thankful.