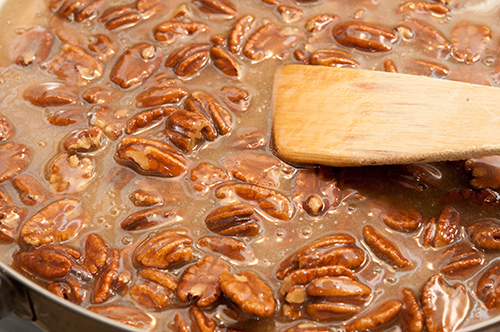 Candy making, in some circles and at some times of year, is serious business. In Texas, we love pralines. Let’s get this out of the way: The word’s first pronunciation is pray-leens, not prah-leens. The full name is pecan pralines, but the nut doesn’t need to be mentioned. There are two versions of this delectable wad of sugar, fat, and pecans (pe-cahns and not pee-cans, obviously), with preferences on both sides; chewy and crisp  have different recipes and different textures and different flavors. The results of a successful session—often consumed within a few hours—represent the highlights of the sugar/pecan affinity.

Yet so much can go wrong. The ingredients are simple: sugar, cream or buttermilk, pecans, a dash of salt, vanilla, and a little baking soda. The process is another story. With a candy thermometer, the guesswork is reduced, but not as much as might be expected in our advanced technological age. The physics and chemistry of cooking are fascinating but never more particular as in praline preparation, so the thermometer is a help, not a solution.

The elements are these: a heavy pan, a wooden spoon, medium high heat. Simple enough. Time and application are next: Bring to a boil without stirring. Stir constantly until the mixture reaches 238-241° F. Remove from heat immediately, add pecans, and continue stirring until mixture loses its gloss.

One website gives the process a “Difficult” rating, but until an attempt is made, the reasons are not clear. Because each element is essential, each must be used with exactness. The recipe itself, although there are variations, is not as important. Even a novice would know not to substitute skim milk for cream, for example. Using an aluminum spoon to stir might not seem to be in the same league unless other variables are considered.

The timing factors present even more important barriers. Why would 230º not work as well as 238? Or 242 perhaps? Scientific inquiry holds those answers, buried in the molecules of sugar. Regardless, the stage of cooking required is within certain parameters. Too low, and the pralines stay goo. Too high, the result is hardened beyond dental capacity. Without a thermometer, the eye can prevail, for some old schoolers. The shape and density of a drop of sugary mix in a glass of water can be assessed, but that is obviously a job for the seasoned cook.

And now for the spoon. Metal has properties of conduction. Copper (and aluminum) wiring carry electricity from source to outlet. So too does a spoon carry heat away from a hot liquid, an ideal solution for that too-hot-yet cocoa but not for a mixture that must increase in temperature. Hence the wooden spoon. Or at least says I.

Once the correct stage develops, the candy maker must continue to work the mixture to bind the ingredients. Taffy gets pulled, and pralines get beaten. When the gloss is gone, the mixture has both cooled to a point at which it is manageable and also coalesced into a cohesive, non-sticky form.

On its own, this lesson seems long and somewhat tedious. By batch five, someone I know was beyond frustrated and into “What a story this’ll make!” The novice candy maker’s observation was simple—the thermometer must be broken because it wouldn’t get above 230º. Obviously. And I was not one to argue, since I wasn’t there and wasn’t thinking,

The key in this instance was patience. Unless something really strange were at work, the candy thermometer was fine. Patience was lacking, perhaps because of lack of experience and lack of insightful assistance from moi. Had the candymaker endured a while longer, the candy would have been able to get hotter as whatever mechanism in the sugar mixture reduced. It works. It always does. Mystery solved.

These days—one hesitates to generalize—patience is in shorter supply than its usual short supply. Human nature has rather narrow limits in this field anyway. We need more right now. I’m using the phrase “in the middle of a pandemic” regularly, but neither I nor anyone I know actively thinks of it literally. We are all hoping we’ll wake up one morning and it’ll be over.

So, if we are in the middle, there are months to go. I am not thrilled with that. Sometimes I wonder if the worst is yet to come. Every day I check to see who died the day before. What kind of joy is there in that?

Perhaps in the months to come we’ll learn that the mask wearing and social distancing weren’t effective. For now, I’m going with the phrase “Err on the side of caution.” I went through a time pronouncing it ur, which is second. I’ve corrected that now. Stay smart.

2 thoughts on “The Candy Thermometer”