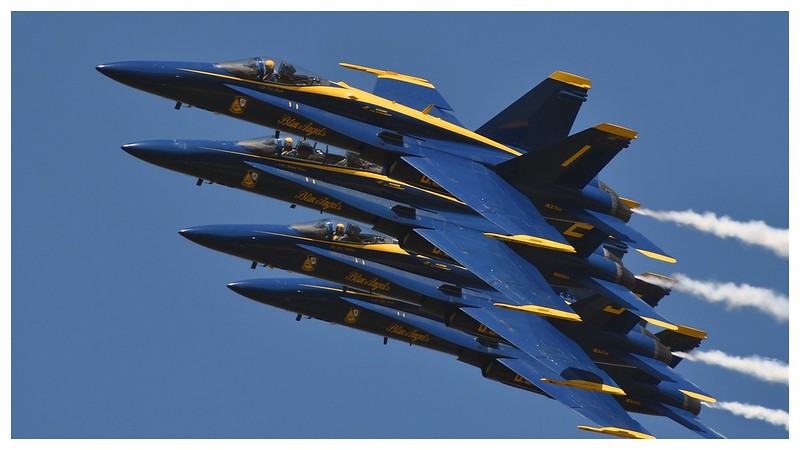 Watching the US Navy team called The Blue Angels fly over Dallas on a perfect spring day, I could think of only one word: stately. It wasn’t what I expected. Rather than booming, speeding, thundering, the jets came quietly, their sound trailing behind them. Many years ago, jets flying over my home town regularly broke the sound barrier, a phenomenon you can see (not hear) here or see (and hear) here. The Blue Angels’ flight path began in McKinney, came south 30 miles, made a loop, headed south again, turned north, then west, another loop and a flourish, and landed south of Fort Worth. It took 35 minutes. Again, stately, because they seemed so slow. Their lowest speed is 120 mph, which I find as hard to imagine as their fastest—700 mph during shows, faster when not around people because they’re not allowed to break the sound barrier (761 mph) for shows. Here is a video from a friend, used with permission. The perfect formation, the power of the machines, the occasion—something brought tears to my eyes. Considering their goal of honoring the first responders and health professionals, the beautiful and stately was appropriate.

Consider another stately performance: Peter Serkin strides onto a stage, slowly, in a church performance hall. It’s 2017, and he’s 70 years old. He will play J.S. Bach’s Goldberg Variations. Flawlessly. From memory. For 49 minutes and 47 seconds. With a delicate grace, without an embellishment of personality. Style is one thing, of course. Restraint is best, in my opinion. (Although I admire Glen Gould, and he plays distinctively, the self is keenly present.) The rest, however, reflects the best in art. The sheer magnificence of having that much music stored in one’s mind so far exceeds anything I can do that—like the Blue Angels—the perfection and power amaze. (You can get the gist with only the opening piece, as committing to the entire 49+ is a lot to ask. Serkin died last February. He came from a traditional musical family, famous father and grandfather, but he was also a champion of modern music, Olivier Messiaen in particular. Perhaps you will listen here to the Vocalise movement of the French composer’s Quartet for the End of Time. It has a simple ABA form for the Angel who announces the End; the musicians, all quite young, seem to understand their goal: harrowing us with the A sections, calm but clear for the lengthy B. A copy of the program from the prison of war camp where it was first performed combines the chilling and the orderly. No, I don’t think we’re at the End, but the quartet is arguably Messiaen’s most famous work, hence its inclusion.)

It’s not that I can’t do some things well, or that I don’t sometimes feel satisfied with an effort. In this performance of “The Imperial March” from Star Wars, John Williams conducts it with an appealing self-satisfaction. Once again, we could say the tempo is stately. The entire program was all Williams, of course, which you can see here. He noted that the brass players asked to play the march even though they’d had many demands for the rest of the evening. Of course, it was the perfect ending, and a crowd pleaser. It’s just that I am in awe of these things currently. I believe this achievement level influences our respect for the arts.

Today’s title comes from Gerard Manley Hopkins’ sonnet “The Windhover.” The yeloow-highlighted words link to definitions. He’s writing about a bird, more familiarly known as a kestrel or falcon. More accurately, he provides the reader with the experience of being one with the falcon in flight. Using words to do so takes my breath away. You can hear Richard Thomas as John-Boy Walton read it here in his soft Virginia mountain accent, as a gift to his mother on her birthday; this teacher in India gives a lecture on Hopkins and the poem to an amazingly attentive class; here Jakia Shanel Probst participates in Poetry Out Loud, the National Endowment for the Arts initiative; new to me is this Irish form called sean-nós, produced here by Lorcán Mac Mathúna, stunningly and with art to accompany. But read it aloud to yourself. Fly.

Let me insert a shout out to actors: I who can barely recite the alphabet admire the ability not only to assume a character but also to memorize hundreds of lines of a play. Here Richard Burton recites another Hopkins poem, “The Leaden Echo & The Golden Echo.” The first time I heard it, I was soon so lost I couldn’t even tell he was speaking English. Having the words helps, even though some aren’t familiar and need a dictionary dart. But it’s melodic magic, and all things considered, perhaps his most accessible poem: You won’t lose your beauty if you give it to God. Here you can watch a very fresh A Midsummer Night’s Dream by The Backroom Theater Project. Everyone is remotely connected, and the effects quite cleverly catch the theme “Is there no play to ease the anguish of a torturing hour?” Plus, Snug the Joiner/Lion is our own dear Katherine Bourne Taylor.

(Not to discount dancers and gymnasts and athletes and artists or any others whose minds command their bodies. That’s a rich area which, now that I think of it, needs its own column and possibly its own columnist.)

2 thoughts on ““…the achieve of, the mastery of the thing!””