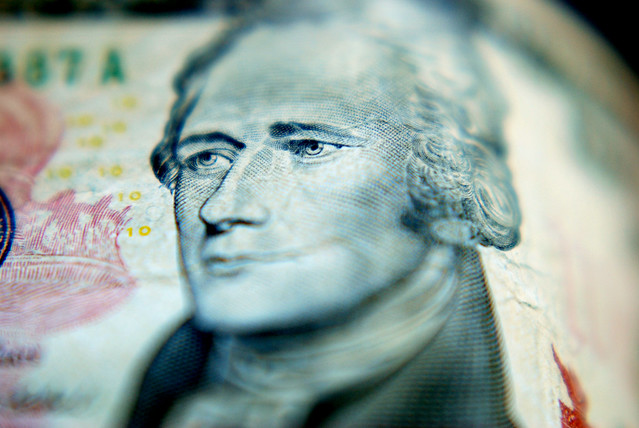 Hamilton the Musical has its own history. It took Lin-Manual Miranda six years to write it after reading Ron Chernow’s book, Alexander Hamilton. Clever title, huh? It’s won more Tonys than anything else ever. Miranda won the Pulitzer Prize for Drama.

The Revolution. To tell the truth, it didn’t go that well at first. Hamilton wanted to fight, like Aaron Burr. Glory, that was his dream. But no. Washington wanted his help but in a different way.

Eliza was the great man’s wife. There’s a little issue with her sister, Angelica. Hamilton had (shall I say?) a bit of a reputation.

In war—as in other fights—people get mad. General Washington fired one of his commanders, Charles Lee, who was unfit to lead. He goes off on Washington, who forbids Hamilton’s plan to challenge him to a duel. Hamilton and Burr are the seconds, however. Ironic, right? Washington suspends Hamilton briefly afterward.

With his first child on the way, Hamilton has a new reason to live, other than dying in a blaze of glory. He and Lafayette figure out how to actually win this war!  King George has a comment or two after that…

“Yorktown (The World Turned Upside Down)”

Hamilton and his wife have a son. Aaron Burr sings about his daughter. Some sweetness here. Then they have to get to work. Making a country up from scratch—not that easy.

Money. Where to get it. How to spend it. Debt. Always an issue. Hamilton was the first Secretary of the Treasury. He had a plan. Aaron Burr, well, he’s getting jealous.

“The Room Where It Happens”

Meetings, meetings. When France needs the new nation’s help, Hamilton advises Washington to remain neutral. He does, but then everybody else gets mad at Hamilton. What a mess!

“Washington on Your Side”

George Washington decides to retire. John Adams will replace him. King George has some comments (of course!) and Hamilton is…OUT!

Rather than letting his opponents get the better of him, Hamilton writes about his affair with Maria Reynolds before they can. Savvy? Maybe.

Not good for a marriage. Sad. After George Eacker gives a speech that criticizes his father, Phillip Hamilton challenges him to a duel. Dad Hamilton advises him to shoot in the air, hoping and assuming Eacker will do the same. He doesn’t. Phillip dies. So very sad, but his parents reconcile. He’ll never be president, but Hamilton backs Jefferson instead of Burr. Letters between Burr and Hamilton follow. The end is near.

“Best of Wives and Women”

Why? Why? Why did Hamilton intentionally miss his shot?

“The World Was Wide Enough”

Legacy. Hamilton has the $10 bill and The Federalist Papers. Burr? Not much at all, remembered as the man who killed Alexander Hamilton. But this is his story, too.

“Who Lives, Who Dies, Who Tells Your Story”