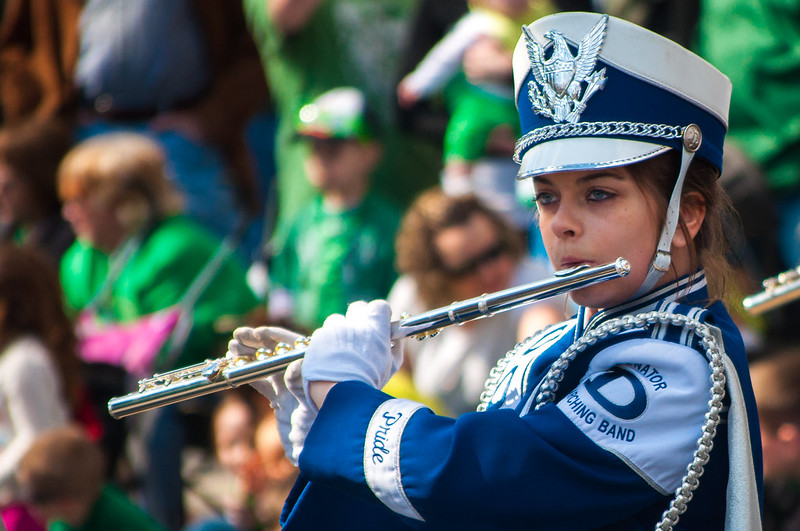 Last week, I had the opportunity to go to a UIL marching band competition with a friend to watch the group including her son and daughter. It was held in a stadium I went to for the better part of ten years, many Fridays in the fall. All our sons marched; the youngest was a drum major his senior year. When I wrote about “kids these days” last week, we could include band kids these days. My friend’s children were marching about 8:45 in the evening but had to be up at 3 a.m. to catch the bus for Waco the next day to march in that completion. All the while memorizing music, remembering their marching patterns, and keeping up their grades. Complexity deluxe. Back in the day, yes, we learned a new routine every other week, but the music was simpler marches—not Shostakovich and Puccini—and the routines themselves didn’t involve anything but 8 steps to 5 yards. These kids go backwards and slide, sway and cross-step. I still have nightmares about getting lost.

Leaving the stadium, says I, “This looks like a shortcut.” So off we go through a side door. Soon, a woman calls out, “You look smart. I’ll follow you.” Thirty yards later we were all at a dead end and had to turn around and retrace our steps. I say “all” because we looked behind and a dozen people were following us. What could we say? Sorry sounds insufficient. My friend made some blonde jokes because we are. I couldn’t understand why the first woman thought we were smart having only seen the backs of our heads. In the best of times, I have to tell people I’m smart because they won’t be able to figure it out on their own.

This leads me to the 50th high school reunion I attended last weekend with a friend. A man there had been in many of my classes beginning in the third grade. No one else there had known me as long. Introducing me to his wife (he’s 6’6” and she is 6’5”—impressive), he said, “Oh, this girl! She has an IQ so high it’d make water boil!” He repeated it for effect. Obviously, he had mistaken me for someone else. (I can see your eyes rolling out there.) Others said I looked just like I did in high school, hadn’t changed a bit. So, among the blind and the liars, on we went.

What struck me as particularly interesting, however, was that we had elected class officers all those decades ago, and they were still functioning. Our president was gracious and tender, as she was. Another leader welcomed us with dignity and sincerity, like he did when he was asked to give a brief memorial as a teenager regarding a deceased classmate. A shy woman—then and now—eulogized a man we knew as a young poet and writer who died of AIDS some years ago. It would have been difficult to do, but she did it beautifully. Others in the class handled decorations (not as easy as you’d think) and food and venue arrangements, making all those decisions we don’t even think about. It’s a duty, perhaps, that we never think about.

First lesson: Go to your reunion. At least once. You will be surprised to meet people you haven’t seen in decades and learn where they’ve been and what they’ve done. One of us met Mother Teresa. Another does animation and has been nominated for an Emmy. Still another has worked in two presidential administrations. One has practiced both law and medicine. Someone has done a lot of work to get these people together for your enjoyment. Go.

Second lesson: Decisions you make early on in life can determine your path to a point. Choosing leaders is one of those decisions. Politics aside—far aside—people usually make good decisions. All the mechanics are likely more intuitive than obvious. Commitment is among the attributes that perhaps can be sensed. Leadership must keep as its goal the benefit of those being served.

Third lesson: You already know this one. Life is precious and fast. Do better about holding on to friends. One woman as we were leaving wondered how many more of us would be gone the next time. No telling. If everything changes us, then this sweet experience full of words and hugs will help us all be better people, before we get our moment of silence.

1 thought on “Notes on Leadership and Class Reunions”