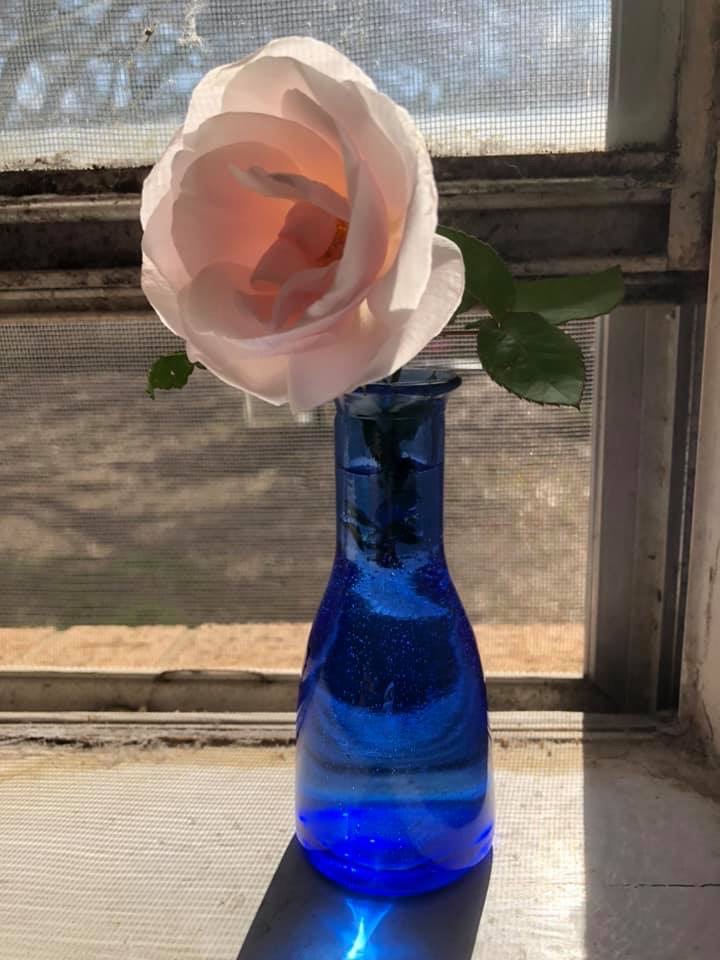 This week I’m writing about light, its beauty and its meaning. The photo was taken by a friend, and I think it’s transcendent: something about the color of the blue (technically, cobalt) and the pale pink are enhanced, as if the light permeates them both. I have another picture with a similar characteristic. A nun sits with her back to us, on a ledge in the Grand Canyon. She’s all in white, and light seems to go through her. I don’t know any terms that describe this effect. Perhaps you will and can share.

Understanding what light actually is eludes me. Explanations here and here use words cogently, but I don’t really get it. Yes, light is energy. I emit it, and so does everything else. Metaphorically speaking, some people seem to have the ability not only to gather more light than others but also to radiate it more abundantly.

A favorite science fiction writer (Isaac Asimov) wrote a favorite short story (“The Last Question”) about the evolution of computers. Eventually, entropy has ended everything, but the minds of all beings and future computers have continued to work toward a solution. Awesomely, you can read an archive of the original story here. As you can surely predict, finally, the answer comes: “LET THERE BE LIGHT” and there is light.

Does that conflict with my belief system, in which a Being I call divine called light into being? Not at all. While the Hebrew word or means simply “light,” the phrase that means “light of God” is elohim, which in my faith we use as Elohim, the name we take to be that of the Father. It appears in the Hebrew Bible as such but in English translation is simply “God.” The distinction, however, is that the former is a name, the latter a description.

Most of us want to “shine a light” on things, to understand, to explain. In the last few weeks, the two political sides have grappled with this problem to little avail. Last week in my blog this spam comment appeared: “What a material of un-ambiguity and preserveness of valuable knowledge on the topic of unexpected emotions.” Gotta love it. While the current political dudgeon (“a feeling of offense or deep resentment”) remains high on both sides, with no end in sight (light reference), I suppose I can continue to seek truth and beauty on my own.

As much as I’ve thought about this, words sometimes are not as good as the original picture. I can leave this at that. I did, however, learn that the “C” in Einstein’s E = mc2 means celeritas, the Latin word for speed. So that’s good. Accelerates my learning, as I should have asked before.

1 thought on “Look What Light Does”