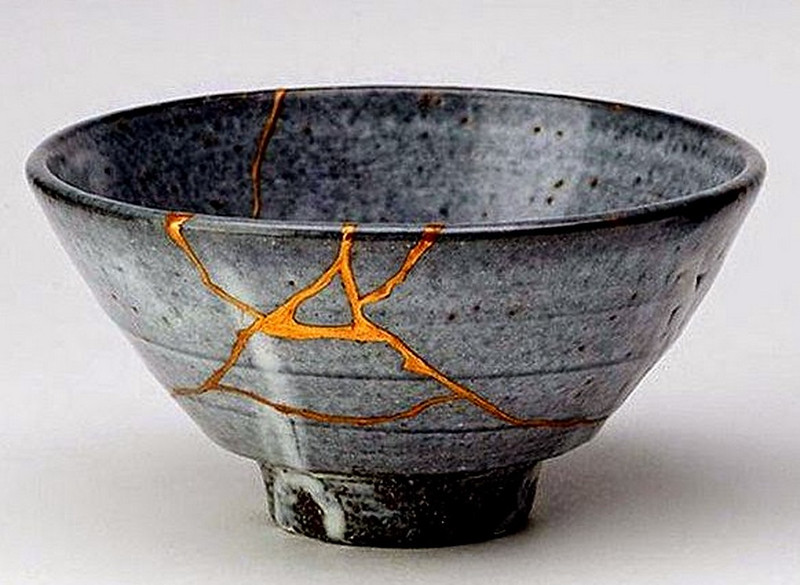 What a weekend. I met Famous People, again. I learned great things. I made connections with less-than-famous people who are doing great things. Two principles presented themselves. They had nothing in common until I saw that they do.

First, kintsugi is the Japanese art of sealing broken ceramics with glue and gold. The word means “golden joinery”; another name, kintsukuroi, means “golden repair.” If you don’t of these, you likely have heard of its philosophic basis, wabi-sabi: “asymmetry, roughness, simplicity, economy, austerity, modesty, intimacy, and appreciation of the ingenuous integrity of natural objects and processes.” I love Japanese art forms and was glad to learn more about kintsugi.

The purpose for the discussion came when Sharon Eubank, worldwide director of LDS Charities since 2011, gave this talk “Turn on Your Light” in 2017. Story is the way to teach principles, and she recounts a sea rescue using a human chain. Her five ways of turning on your light reflect a happy way to be.

When Sharon Eubank spoke on Friday evening, she used the Japanese art form as a metaphor for understanding healing. She had been working in Syria on the eve of the war that began in 2011. Her tasks were specific: providing a source of improved bull semen for Syrian herds and increasing instruction in neonatal techniques for obstetric practitioners. And then she and her group had to flee. We don’t often need that word. Sometimes the pain of its aftermath lingers for years, but there is hope, sometimes explained and explored through art.

Earlier, as a legislative aid in Washington, Eubank had this to say: “I learned so much about the nature of compromise in government. I learned that surprisingly most things get done through relationships.” When we are not concerned about division in our currently divisive (not simply divided) system, we show a lack of understanding about how things have worked better in the past, as Joe Biden learned recently. Apparently, the age of relationships may have ended.

Second, sound baths combine two words one doesn’t expect. The experience isn’t a fad but comes from an ancient Tibetan meditation practice using singing bowls. Here you can listen for three hours, and there are longer, nine hour versions if you need that much relaxing. Do look at the bowls even if you don’t need that much relaxing. Again, healing and cleansing.

As usual, I think (almost positively) that I’ve learned about both these topics in the past. Why did they not “stick” in my memory? Why do we use that word to describe holding on to an idea? Am I to embrace that which needs repairing in my poor brain? (An aside—I neglected to save the first version of this. What might be lost that I don’t remember?)

The other Famous Person I met was Richard Bushman, an important LDS historian famous for a Joseph Smith biography, Rough Stone Rolling, and much additional work. His degrees are from Harvard, and he taught mostly there and at Columbia. He is now a co-director of the Center for Latter-day Saint Arts in New York City. Which is not in Utah. He believes the arts are the way forward, about which I hope he plans to write more. I told him as much.

It’s humid and cloudy and cold. Maybe that’s affecting my memory too. Off to get white thread for another project: sewing seams in long, straight lines. No gold involved.

3 thoughts on “Kintsugi and Sound Baths”