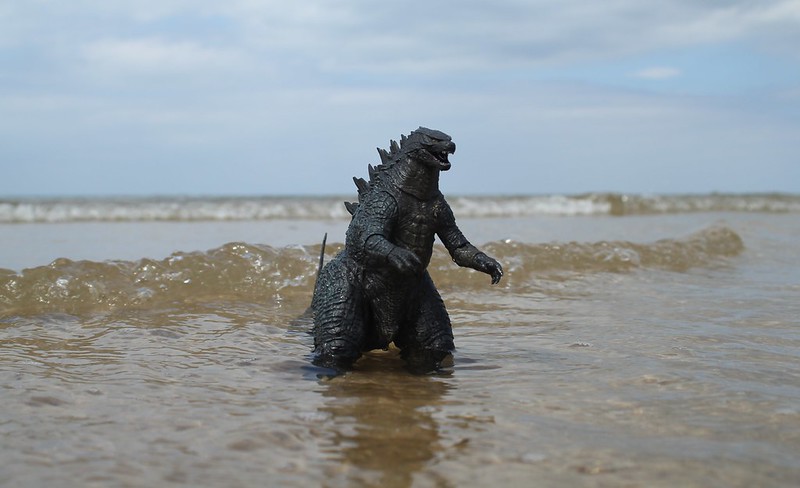 Last weekend, Godzilla: King of the Monsters (2019) aired while the grandsons were here. We’d seen it at the theater together when people did such things, so we had a déjà vu plus nostalgia. In the movie just previous, Godzilla (2014), we learned much about this cultural phenom. Most importantly, I came to understand that he (or she, there’s that possibility) is actually a hero, a protector, a restorer. The younger two of the group were so impressed they committed to watching all the earlier movies available on YouTube. The number remains a mystery, though since 1954 there will have been 36 when Godzilla vs. King Kong opens (?) this year. This trailer is vague enough and includes the opening of Yeats’ “The Second Coming.”  The reader has what may be a British accent but mispronounces “gyre” as “guyre” a point which I find upsetting, of course, since the UK and US pronunciations are the same. Hence, “gyrate.”

Back to the grandsons. The oldest was asked by the youngest something about Godzilla and responded with the spot on official version of the symbolism: After the dropping of the atomic bombs in Japan, Godzilla became the face of nuclear war and its potential to destroy. When I looked at him, puzzled, he continued: Or he can just be a really big lizard who eats cities. Both are correct, and enjoyment can result with either. We’re probably doomed anyway, so we might as well watch. (Side note: Apparently there is a sequel to Avatar, cleverly titled Avatar 2 so far, featuring a baby since apparently that was a good look for a baby Yoda in The Mandalorian. Trailer here, more flames and such.)

That response reminded me of a car trip during which we were listening to a horror novel on tape (mid-90s) and my oldest, on hearing that a passage in which some caged rabbits were brutally slaughtered, offered this analysis: “Oh—the slaughter of innocence.” I sighed. Maybe, but it could have just been a mean thing to do in order to show-don’t-tell how bad the bad guy was. Source forgotten. Stephen King maybe?

In another example of literature ruined, a student of mine once commented that she understood all the symbols in The Wizard of Oz because her teacher had taught the class about them. Her second insight was that this “information” had ruined what had been her favorite movie. It was sad. My analogy is that too much of that kind of thing can kill a work if done poorly. Mark Twain (may have) said, “Dissecting humor is a lot like dissecting a frog. You learn a lot in the process, but in the end you kill it.” I’ll allow that sometimes a deeper meaning can enhance enjoyment, but tread carefully lest you get carried away.

I don’t have a great transition for my next bit. For years, I’ve puzzled over this passage from Ecclesiastes 9: 14 “There was a little city, and few men within it; and there came a great king against it, and besieged it, and built great bulwarks against it: 15 Now there was found in it a poor wise man, and he by his wisdom delivered the city; yet no man remembered that same poor man.” Its inclusion seems random, on some level. Again, it’s vague and remote. We know nothing, no location, no names of kings or wise men, no time. As often happens in Ecclesiastes, more is said, but the relevance is not clearly stated:  “16 Then said I, Wisdom is better than strength: nevertheless the poor man’s wisdom is despised, and his words are not heard. 17 The words of wise men are heard in quiet more than the cry of him that ruleth among fools. 18 Wisdom is better than weapons of war: but one sinner destroyeth much good.”

So it could be read as a simple tale and an admonition to be wise even with the knowledge that you are likely to be forgotten. This series of explanations goes all out in helping us see something that may or may not be there. I don’t think it will ruin anything, however, since the story itself is so simple. A companion story—not connected in any way except for plot—involves a woman, also unnamed, who saves a similar little city. The details, however, would make a good action movie: The bad guy’s head gets thrown over the wall as the sign all has been accomplished. The wise woman is anonymous, but everyone else and their scribe gets named. 2 Samuel 20, in case you’re interested. Sheba is the bad-then-headless guy.

And without a good transition, a conclusion becomes difficult. I’m really not in any way shape or form an Old Testament scholar, but one of the clearest favorites is this from Jeremiah 12:5 “If thou hast run with the footmen, and they have wearied thee, then how canst thou contend with horses? and if in the land of peace, wherein thou trustedst, they wearied thee, then how wilt thou do in the swelling of Jordan?” Clear enough, even with the metaphors. It could be worse, and if it is, you should be prepared because you know it could be worse. Right now, I’m watching here and there and muted Star Wars: A New Hope. It’s the first, but they’ve changed it. Oh well. The entire series is open to interpretation, for better or worse. For now, I’m going to come out opposed to that impulse. If it doesn’t speak to you as it is, why would you care about it on a “deeper” level?

1 thought on “Interpretation and Godzilla: Notes and Asides”