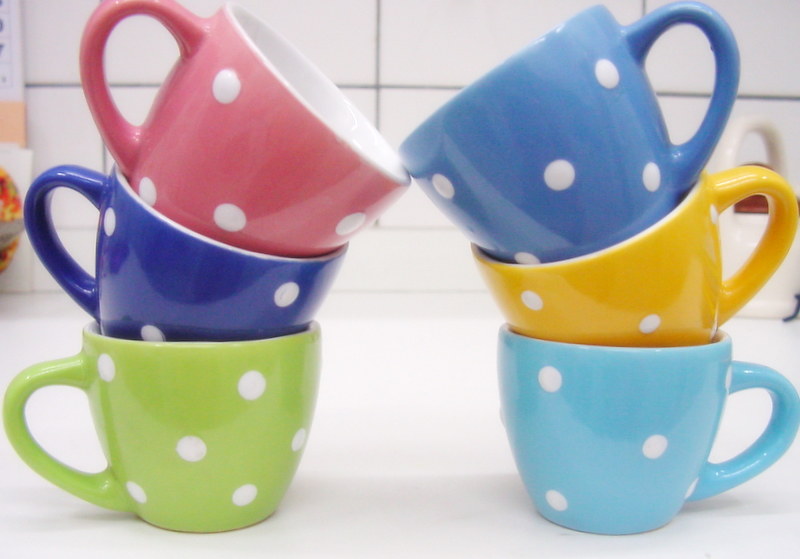 The phrase “in your cups” means that you’re drunk. I don’t drink, ever at all, but it’s one of those phrases that I find interesting. It’s not new. One translation of 1 Esdras 3: 22 uses it: “And when they are in their cups, they forget their love both to friends and brethren, and a little after draw out swords.” That’s alcohol for you, sometimes. Esdras is the Greek for Ezra, who has a book in the Old Testament, so Esdras is used to differentiate those books from the canonical one. Confusing, I know, but it has some stories worth reading.

The word “intoxicating” has to do with toxicity, poison, which ought to say something for some. But we use it much more broadly to describe feelings and sensations: an intoxicating scent or color. That’s a long way to go to connect alcohol to teacups, but one does what one must. I have lots of unmatched cups and mugs, and some evoke memories.

Bobbie: It wasn’t cancer that took her but, while compromised, a stomach bug from her husband’s office. She was smarter. She taught me “L for left” holding up index finger and thumb, but she didn’t know mayonnaise didn’t have milk; I taught her that. Suddenly her lactose-intolerant daughter’s sandwiches were better. We liked cats, she and I. She gave me two mugs, muted creamy stoneware, with blue chats. I try to give one away to an admirer (of the cup) but find I cannot. Too precious to give, too precious to use.

Jerry: A favorite gift, his tall white-and-black mug reads: “DO NOT TRUST THE GOVERNMENT,” spoken by a scraggly angel, with others adding “UNDER ANY CIRCUMSTANCES. FOR ANY REASON. EVER.” Meant to be funny then, probably illegal now. But he did work for the government and loved that work. He drank a quart of coffee of a morning, a Coke for lunch, and a quart of tea in the afternoon. I don’t know how the man slept. Oh, a fall took him—his head. I would feel odd using it.

From the Young Women: Getting a surprise gift is often wonderful. Sometimes not. I once regifted a fruitcake before I knew that was bad manners. A few years ago, the Young Women’s group from church brought over some mint herbal tea and a lovely, large celadon-colored cup. (Almost $500 for 24 plates from Home Depot seems both an odd source and steep, but it’s the color.) To be remembered is a feeling to be treasured. I use this cup all the time for this reason and also because it’s a good big size. Thank you, girls.

Dallas Morning News: One likes to be chosen. That team-making horror from grade school really happened to some of us, probably not anymore. I submitted an application (data), a resumé (time), and a writing sample (an old letter to the editor about a terrible review of a terrible production of King Lear; not printed). But there I was, chosen to write as a guest for a year, with twenty others. I basked in my editor’s appraisal of my first effort: “A noble column.” The logo has since faded, smudged off light blue and green. Yes, it can be used, if careful. If broken, the pieces might be saved.

From Personal Children: Quite an array, from yellow plastic ones with names written on, now decades-old and fragile, to an exquisite yunomi (the Japanese cup with no handle). This message from the Japanese company that charges only $3.40 for one: “We do not support urgent requests, so please refrain from using the service if you are in a hurry. We are very sorry for not being able to meet your wishes, but we would greatly appreciate your understanding. Thank you.” One must also spend $136.4 [sic] for free international shipping, currently unavailable to USA. Regardless, that’s a lot of cups. Deep brown, with black and ochre accents and gray crazing, this cup has never been used. I don’t know how.

Dorm: Most of us were on our own for the first time in a dorm. That sounds so 20th century. They fed us well; the freshman 20 is real. I’d never heard of lasagna, or pumpkin bread. We made cocoa and popcorn in our rooms, using electric teapots and poppers. My cup—and just because it’s an antique doesn’t mean it’s pretty—is that harvest gold with bas-relief apples and edelweiss. Actually, that sounds much fancier than it is. The inside isn’t smooth but has a bumped-out surface. We washed them in our rooms, probably with Ivory hand soap. I just checked. You’ll be horrified to know that a bit of cocoa mix lingered, stuck to the bottom crease. I’ve fixed it.

Korea: The only one that remains looks like bamboo but is dark brown. An attractive-enough blending of Eastern and Western sensibilities, perhaps. Those days were so long ago. Good memories I’ve written about before—Handel’s Messiah sung to a full house, needing a second performance. The Cold War was in full force, and the Viet Nam conflict raged. Although it was almost 2000 miles away, we knew keenly that if the forces weren’t in Korea, they would likely be there. And occasionally the North Koreans would hijack a bus and head our way. But we managed, learned how to play bridge and to cook without a stove, made friends, and traveled as much as poor people could. This cup feels like a relic of times past. Not museum-worthy other than in my mind.

Wedgewood: My grandmother’s pattern was St. Austell; my aunt’s, Florentine. Their colors are similar, vibrant reds, blues, and greens on the white bone china. Just as it sounds, the material is made of bones, ashes technically, with other materials. Two of its important characteristics are strength and translucency. You can hold it to the light and see the shape of your hand. I put it in the dishwasher, probably to the horror of some. My grandmother did, or at least I think so. Grandchildren prefer this for tea parties, probably for several reasons having to do with I don’t know what. A natural extrapolation, for vegans, would be an avoidance of this material, obviously. The vegetarian grandchild doesn’t participate in the tea parties, so I have not faced that moral dilemma yet. I have given a few of these cups to special friends on occasion. There are far too many for me to have, really.

You may roll your eyes and wonder at such sentimentality. Or you may identify and go look at your own pottery. No judgment. I have posted this essay before: “Neat People vs. Sloppy People.” I still love it even though I am 4% more able to throw things out now. Improvement. Hurray.