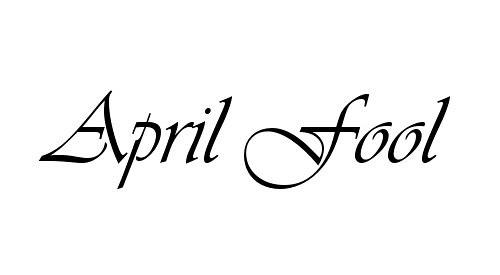 Occasionally, and when one has little else to do, one happens upon a serendipitous connection.  Perhaps you know that Julius Caesar changed the calendar to allow for a leap year, but more importantly for this discussion, he established January 1 as the date for the new year to begin. Before that by 2000 years, the Babylonians began making New Year’s resolutions when crops were planted. Hence (one rarely gets to use that word), there may have been times when it was on April 1 for them and definitely was for the Romans: “In the Julian Calendar, as in the Hindu calendar, the new year began with the spring equinox around April 1.” Therefore, New Year’s resolutions were technically April Fool’s resolutions, if the two traditions cross-pollinated, which may or may not have happened. (The History Chanel has nice articles for April Fool’s Day and New Year’s resolutions.)

My family always took the activity of having resolutions seriously. (My paternal grandfather had written a pamphlet on the Julian/Gregorian calendar switch and used the word “humbug” in the title; I never quite understood the problem but he seemed quite adamant about it.) The practice seems to fallen out of use, though gyms do see a surge of attendance during January.

Although hoaxes have been common in the past, my expectation is that this year will be different. Levity is lost, for the moment. I suspected this might be the case when St. Patrick’s Day went uncelebrated on March 17. I happened to wear green because I remembered, and when people at the hospital noticed my attire, many commented, “Oh, yes, I forgot.” In that faraway yesterday of 2019, there would have been garlands of green shamrocks at the nurses’ station.

So if resolutions are not famous for lasting, what will? “Commitments” might. Using the phrase “Will you…?” works in many—if not all—circumstances. Energy levels being what they are, it sounds too formal and forbidding. Days being what they are, I submit the idea of April Fool’s Intentions. Think of all the cleaning and reading that have begun already. No gyms, obviously, but lots more walks, lots more serious things done. In real earnest, we can think of what we do when this sequestering ends.