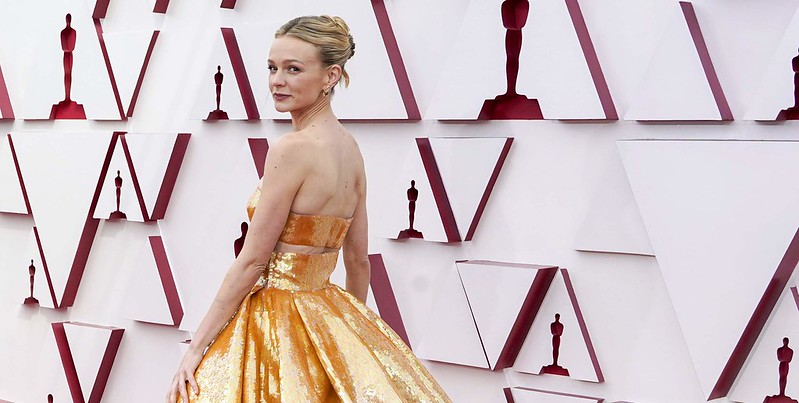 Rather than add little gifts at the end, I’ll put them here just in case. Although I worked hard on this blog, interest may be limited, and I think it’s important to give you something.

First, the website FilmSite is amazing. Tim Dirks, a critic and film historian, has compiled hundreds of reviews and organized thousands of films into an accessible, concise, searchable compendium. It’s much easier and more accurate than googling.

Second, there are apps for locating movies on streaming services. I didn’t know. The one that was recommended and that so far is awesome: Reelgood. It’s free.

Third, the clothes. The red carpet was truncated this year, but people still wore beautiful things. Here are a few and here are a lot. Oh, and the winners.

Statistically speaking, you probably didn’t watch the Academy Awards last night nor did you see the Best Picture awardee (Nomadland, no surprise). Even the Grammys were down over 60% from last year. According to Sunny Bunch, the Washington Post movie reviewer, even films on Netflix (now in 2 out of 3 homes) did not have name recognition. He assesses one reason: “And while it would be foolish to suggest that a movie’s artistic merit is intrinsically tied to its box-office take, this is somewhat beside the point. Increasing the number of best-picture nominees has only accelerated the trend of little-watched films becoming awards-season darlings, turning off mainstream audiences.”

Writing about things I haven’t read or seen is not new. I never read The Scarlet Letter, for example, and apparently it was read to high school students for years as a prime example of the literary essay. Perhaps you, too, used Cliff Notes for a test. No, I’m not going opine on the nominees this year. Instead, I’ll share what I do know about them from what I have read, put them in categories/genres, and talk about movies I have seen and recommend.

The Father (2020), directed by Florian Zeller and starring Anthony Hopkins, takes on the parent-child relationship when Alzheimer’s sets in. The review on RogerEbert.com offers insights into the techniques used—different actors in the same role, plot confusion, the shifts in reality—suggesting that the audience is experiencing what this parent does.

Aging as a topic wouldn’t seem particularly “fun,” but this site lists 20 that are, actually, entertaining and even endearing. Driving Miss Daisy (1989) doesn’t deal with dementia, but many issues both of the time setting and the natural effects of aging are explored. A Trip to Bountiful (1985) introduces another spirited older woman as she visits her home one last time. Both were originally plays, with the latter by the Texan Horton Foote. Then there’s The Notebook (2004), which the site calls “sappy” but if you didn’t cry, then we need to talk. One on the list that I haven’t seen, Marjorie Prime (2017) is a sci-fi treatment of a woman who can interact with a younger version of her deceased husband via AI. [Not about aging but using the technique of things-are-not-what/who-they seem are these two: A Beautiful Mind (2001) and The Midnight Sky (2020) with George Clooney.]

Judas and the Black Messiah (2021) and The Trial of the Chicago 7 (2020) fall into the category of biopics, although they are also historical dramas. The first is the story of Fred Hampton, leader of the Black Panthers Party in Chicago, and the betrayal by William O’Neal. The first sounds more compelling than the second though both are set in the 1960s and Chicago. Mank (2020) is also in this category. The story of the screenplay and production of Citizen Kane (1941) doesn’t sound interesting, but if you haven’t seen what many call “the best movie ever made,” consider doing so. Opinions vary. Best or not, it is fascinatingly well done.

This site lists ten “must-see” biopics. Amadeus (1984) and The Elephant Man (1980) could not be more different stylistically but have interesting parallels. Mozart, the sparkling musical prodigy, toured Europe as a child; Salieri did not arrange his death. John Merrick, born with profound deformities, toured England with a freak show; his captor kidnapped him after he had been rescued. Although both have plays of the same name, the producers of the Broadway The Elephant Man sued for infringement on the name. Another oddity—Mel Brooks (Young Frankenstein etc.) was a producer of the film, but his name was left off to avoid confusion. Another famous one on the list is Schindler’s List (1993), based on a historical novel rather than a biography; the story is largely accurate though the portrayal of Schindler is not.

Nomadland (2020) is both a road movie and semi-documentary-ish production using non-actors who are really living the life of “workampers.” If you’ve never read a screenplay, consider the one for this movie. It’s only 87 pages long, written by the director Chloé Zhao.

This sub-genre has perhaps the greatest variety of offerings per this site—everything from the generation-defining Easy Rider (1969) to The Muppet Movie (1979) to National Lampoon’s Vacation (1983). (Personally, I’ll never forget my mother-in-law watching Dumb and Dumber without much comment, just because her darling boy wanted to take her.) Mixing actors and real people (sorry) also happens in Richard Linklater’s Bernie (2011), with Matthew McConaughey, Shirley MacLaine, and Jack Black. This clip includes one citizen describing the five states of Texas. The movie is a murder-comedy-justice movie with real-life oddities including the director getting custody of the convicted murderer so that he can live in his Austin garage apartment.

(To combine the biopic, historical, and semi-documentary, check out this list of “mostly-accurate” docudramas.)

Minari (2020), the second Korean movie in a row to be nominated for best picture, tells the story of an immigrant family moving from California to Arkansas to farm vegetables. The word minari means “water celery.” Needing help with the children, they bring over a grandmother from South Korea. The genre could be as broad as immigrant movies or as narrow as irritating grandmothers; either is viable, but we’ll go with the first.

This list of ten and this one with dozens has many that are unfamiliar; this one lists and summarizes more dozens. Gran Torino (2008) with Clint Eastwood as a crotchety older man, a beloved car, and a Hmong family. His line “Get off my lawn,” pithy as it is, reflects deeper intent than one would expect. In District 9 (2009), it is space aliens who are the immigrants, refugees really, and the segregation and prejudice are striking. A series based on the 1988 movie, Alien Nation, has the same premise but carries the integration of these smarter, stronger beings in a different direction. Interstellar (2014) includes lots of other themes, some scientific, some romantic, but basically those of us who haven’t died have got to go. It takes the same premise as the series Battlestar Gallactica (1978, 2004) but reverses the direction. Ancient history versus future history. The animated An American Tail (1986) uses mice/Russian-Jewish immigrants coming to this country while also searching for their lost son, Feivel (or Fievel). We had the stuffed animal version and probably watched the film a hundred times. Trivia: Steven Spielberg, a collaborator, had a grandfather with that name. Bend It Like Beckham (2002) is set in the UK and follows a Sikh family whose daughter wants to play soccer. Humans as interplanetary immigrants/refugees are usually dystopian. A new movie, An American Pickle (2020), features Seth Rogan as both an immigrant grandfather and his grandson in an odd combination of Rip Van Winkle, the American Dream, and a revenge them. Quirky but eventually almost worth it.

Oddly described as a “comedy thriller,” Promising Young Woman (2020) deals with trauma and revenge. It would be interesting to understand the comic amid rape and murder. All I’ve seen is her spitting in his coffee before he drinks it; she was sort of smiling.

The history of revenge entertainment (?), of course, is long and robust. According to this SparkNotes explanation (not a reliable source, often), Hamlet is a “revenge tragedy” with two tropes: figure out who’s gonna get it, then figure out how you’re gonna do it. Sometimes both are in play. The Princess Bride (1987), for example, has a subplot with the recurring line: “My name is Inigo Montoya. You killed my father. Prepare to die.” All Montoya knows is that the villain has six fingers. And yes, there is a lot of actual killing here. We are currently in the middle (two more in the works) of watching John Wick dispatch lots of people. The dead puppy reminds us of the rabbit boil in Fatal Attraction (1987). All the assassinating suggests the Kill Bill (2003, 2004) movies. Perhaps one of the best movies ever made, The Searchers (1956), finds a niche in Alexandra Heller-Nicholas’s Rape-Revenge Movies: A Critical Study, reinforcing my theory that everything has a scholar. Revenge has a long history, but the iconic phrase “Revenge is a dish best served cold” is neither a Klingon proverb nor a line from Shakespeare. Perhaps it all started with Cain slaying Abel, but it didn’t stop there. Were that we could sublimate via movies and not try to get the guy that just cut us off in traffic or whatever else. This list of 25 movies was drawn from over 300; here are ten unfamiliar ones.

Finally, Sound of Metal (2019) offers insights into the deaf community. This long list is alphabetical and covers decades. Marlee Maitlin won a Best Actress award at 21 for Children of a Lesser God (1986), the youngest ever. Coming in November 2021, the first deaf superhero, Makkari, will appear in Marvel’s Eternals, directed by this year’s best director, Chloé Zhao. I’m there. Musicians are keenly aware of deafness because of its effect on Beethoven, who has his own set of movies—everything from A Clockwork Orange (1971) to Bill and Ted’s Excellent Adventure (1989). Of particular interest is a documentary, Touch the Sound (2004), about a Scottish musician, Evelyn Glennie, who became profoundly deaf as a child. Here and here are some videos. I saw her in Dallas with the DSO some years ago. She plays barefoot. The documentary about her is not streaming but a DVD is available, per my new app Reelgood.

And there you have it. Thanks to those of you who recommend movies to me and will, I hope, continue. Sometimes I also read books, just not so much. It’s a failing. You may recommend them as well.