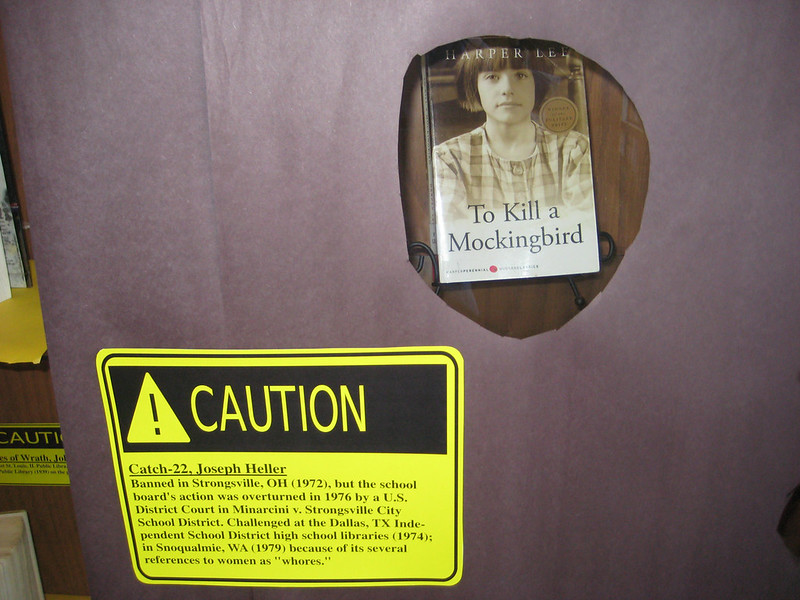 Today’s title is actually clickbait, designed to draw you in—but not for bad purposes or money (“Only $19.99. There’s MORE! Order now and get a SECOND one FREE! Pay shipping only!) There are not 5 books that MUST be banned. Rather, there are five points to make on the subject of banning books.

Although there is a Banned Book Week (September 18-24, 2022-you haven’t missed it!), the correct term is “challenged.” To be banned, a book must be prohibited, per Merriam-Webster. Removing a book from a library shelf has to do with access; sometimes that means putting it behind the counter, as used to happen with Alice Walker’s The Color Purple.

The key here may have more to do with determining appropriateness. A set of predictors includes one called Interest Level, organized by grade. This book is given UG (9-12), or, in other words, high school readers. When the novel has been restricted, as Carnegie Mellon University site explains: “There have been different reasons for the book being banned, including religious objections, homosexuality, violence, African history, rape, incest, drug abuse, explicit language, and sexual scenes. These challenges were all eventually overruled. In 2017, “The Color Purple” was successfully banned from all Texas State Prisons for explicit language and graphic depictions of violence.” No comment.

“We don’t sell certain content including content that we determine is hate speech, promotes the abuse or sexual exploitation of children, contains pornography, glorifies rape or pedophilia, advocates terrorism, or other material we deem inappropriate or offensive.”

So a search on Amazon for “Bomb making” reveals only “bath bombs.” But you can buy Mein Kampf,” Hitler’s autobiography. You can buy Lolita by Vladimir Nabokov, the classic case of a pedophiliac. The Amazon blurb: “But Vladimir Nabokov’s wise, ironic, elegant masterpiece owes its stature as one of the 20th century’s novels of record not to the controversy its material aroused but to its author’s use of that material to tell a love story that is shocking in its beauty and tenderness.” The “material” is the sexual exploitation of a girl beginning when she is 12. He does write well though. You can buy The God Makers: A Shocking Expose of What the Mormon Church Really Believes, a blatantly anti-Mormon book also available as a film. (Not to be confused with The Godmakers by Frank Herbert of Dune fame.) Catholic? No problem. For you Amazon has Hitler’s Pope, American Freedom and Catholic Power (not to be confused with Catholic Power vs. American Democracy), and, of course, Dan Brown’s The Da Vinci Code. The list actually begins in 1581 with William of Orange and his Apologie.

Amazon does not sell The Poisonous Mushroom, an anti-Semitic children’s book from 1938, but Books-a-Million does. The Protocols of the Elders of Zion, easily the most famous, they also don’t sell, but Thrift Books does. Muslim? There is always Shakespeare’s The Merchant of Venice, if you want to be inclusive of anti-Semitic texts.

Salman Rushdie’s The Satanic Verses is on Amazon though this site from India acknowledges it as a source of blasphemy for some in the Islamic world. If you’re a witch, not to worry unless your PTA wants to pull all the Harry Potter books. The series has been banned since the beginning for portraying magic at all. I’ve known parents who won’t allow their children to read these books.

It’s a complicated topic. It shouldn’t be a political one. If both sides would read books, I think that would be great. If one side wants to reject the others’ choices, fine. There is a difference between access and promotion, which I think is the final question. If your choices are “correct” and mine are not? An impossible impasse.